Antonio Conte's Inter were looking for a boost after their dismal 1-1 draw in their Champions League draw against Slavia Prague. 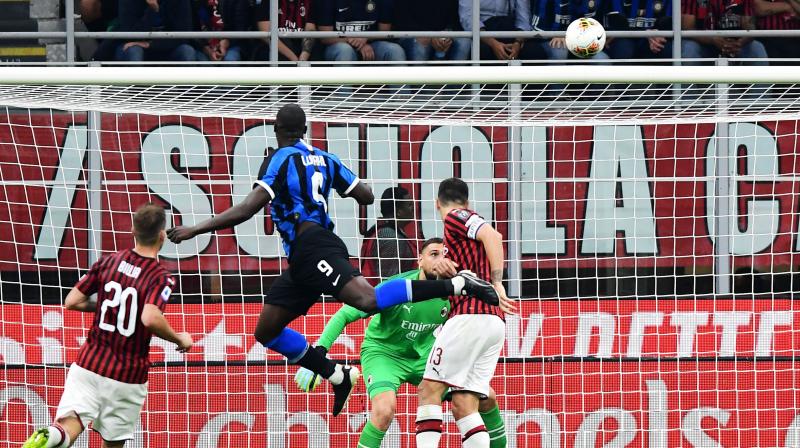 Belgium striker Romelu Lukaku and Marcelo Brozovic's second half strikes gave Inter their fourth win in as many games, putting them two points ahead of Juventus after the champions' came back from a goal down beat Verona 2-1 thanks to Aaron Ramsey's first Serie A goal and a Cristiano Ronaldo penalty. (Photo:AFP)

Milan: Romelu Lukaku fired Inter Milan back top of Serie A with the second goal of a 2-0 derby win that extended their perfect start to the season at the expense of city rivals AC Milan.

Belgium striker Lukaku and Marcelo Brozovic's second half strikes gave Inter their fourth win in as many games, putting them two points ahead of Juventus after the champions' came back from a goal down beat Verona 2-1 thanks to Aaron Ramsey's first Serie A goal and a Cristiano Ronaldo penalty.

Antonio Conte's Inter were looking for a boost after their dismal 1-1 draw in their Champions League draw against Czech outsiders Slavia Prague.

And they hit back in a fiery Milan derby with Belgian striker Lukaku heading in his third goal in four games with 12 minutes remaining after Brozovic's 49th-minute opener.

"At 26 years old, I needed and wanted a coach like this, one who motivates me every day," said Lukaku of Conte.

"My relationship with Conte is very strong, he's a really good coach because he's someone who helps players to develop a lot.

"I'm really happy to be here and to be wearing this shirt."

Milan could thank Gianluigi Donnarumma for keeping the match goalless in the first half after he denied Lautaro Martinez, Lukaku and Danilo D'Ambrosio. Lautaro had a goal ruled out after 35 minutes for being marginally offside.

But the breakthrough came four minutes after the break when Stefano Sensi set up Brozovic, whose deflected shot beat Donnarumma and was confirmed after consultation with VAR.

Lukaku sealed the win and a perfect 12 points from four games when he guided Nicolo Barella's cross home with a glancing header, as AC Milan slip to ninth place with six points.

"We came from a performance in the Champions League that left us with a bitter taste, but gave us more impetus to face the derby in the best way," said Conte.

"It is a deserved victory, I am happy for our fans, because the derby is always the derby."

Juventus had trailed in Turin to Miguel Veloso's goal before Wales midfielder Ramsey pulled the champions level in the 31st minute, with Ronaldo's spot-kick ensuring the win for the hosts just after the break.

It got Maurizio Sarri's side back to winning ways after last weekend's Serie A stalemate at Fiorentina and a 2-2 Champions League draw at Atletico Madrid midweek.

Buffon's appearances have been spread across three clubs -- Parma, Juventus and PSG -- with Maldini having spent his entire career with Serie A rivals Milan. But the 41-year-old could not keep a clean sheet and was beaten by Veloso after 21 minutes.

Amid confusion in front of the Juve goal after Simone Di Carmine missed a Verona penalty, and Darko Lazovic's rebound rattled the bar, Veloso pounced to rifle a long range strike past Buffon.

But Ramsey got the champions back on level terms 10 minutes later on his full debut, with a deflected effort past Verona goalkeeper Marco Silvestri. Ronaldo put Juventus ahead from the spot with just his second goal this season three minutes after the restart, having missed two chances before the break.

Juve held on thanks to Buffon, who denied Mattia Zaccagni and Lazovic in front of goal after 89 minutes, while Veloso was denied a brace by the post.

"After the Champions League the team was tired, but the important thing was to win. Let's take these three points and go ahead," said Ronaldo.

Verona are 12th with four points from as many games. Cagliari and Brescia are seventh and eighth respectively, with each on six points, after the Sardinian side saw off Genoa 3-1 on Friday and newly-promoted Brescia snatched a tight 1-0 win at third-from-bottom Udinese.

Carlo Ancelotti's Napoli travel south to promoted Lecce on Sunday after seeing off European champions Liverpool 2-0 on Tuesday, while third-placed Bologna can join Juve on 10 points with a win over mid-table Roma.