‘We might beat India if we play well as a unit’: Ramnaresh Sarwan

Former West Indies cricketers have been voicing their opinion for preparing a fast wicket in Antigua in order to beat India. 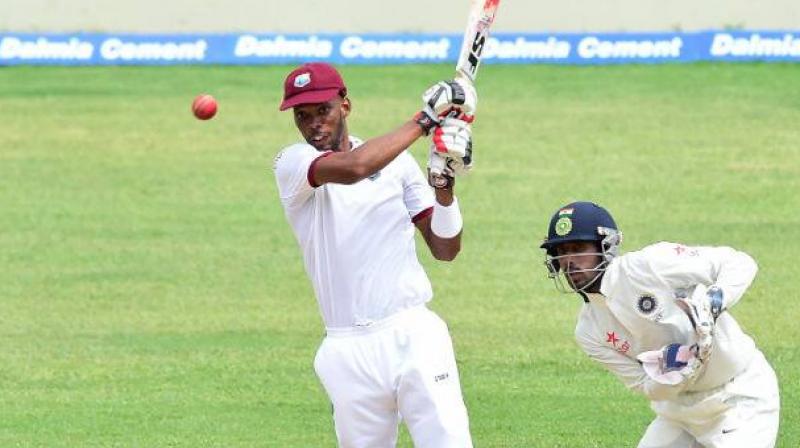 in 2016, Roston Chase played a characteristic knock for West Indies in the second innings of the second Test at Sabina Park. (Photo:AFP)

St John's: As India and West Indies get ready to face each other in the two-match Test series (part of World Test Championship), member of Windies pre-series camp Ramnaresh Sarwan said the team would need to play collectively as a unit in order to beat India.

"If we can collectively play well, we have a chance of beating India. We have individual talents, but it is a matter of playing well as a unit. hopefully, we will be able to play as a team. At the end of the day, once we gel as a unit, we have a chance of winning," Sarwan told reporters ahead of the first Test match.

Former West Indies cricketers have been voicing their opinion for preparing a fast wicket in Antigua in order to beat India. However, Sarwan said the team would need to play well no matter how the pitch is.

"Yeah, ideally you would want a fast wicket in Antigua. We have to ensure we play well on whatever wicket we play on. Obviously, the guys would have plans and if they are able to execute 70-80 per cent of the time, we would have a good chance of winning," Sarwan said.

Sarwan and former cricketer Brian Lara are a part of West Indies pre-series camp. The duo has worked with the team in order to prepare them for the matches against the number one ranked Test team.

When asked on which aspect the duo worked with the team, Sarwan replied that both he and Lara tried to talk to the players related to the mental aspect attached to the game.

"It has been really well. We had Brian as well, the way he put everything to them was very simple, guys understood him. The guys really applied themselves in the pre-series camp," Sarwan said.

"Mostly we have tried to work on the mental aspect with them. We did not want to change anyone, just tried to keep them in a clear mindset, hopefully, they will be able to take it to the game. Brian stressed the need to be patient in the middle," he added.

West Indies were not able to register any win in the recently concluded T20I and ODI series against India.

The Men in Blue outclassed Windies 3-0 in T20Is whereas they defeated the team from Caribbean 2-0 in ODIs.

India and West Indies take on each other in the first Test at Antigua later today.