The only player in the world with three double hundreds in one-day internationals, Rohit bats in the middle order in the longest format. 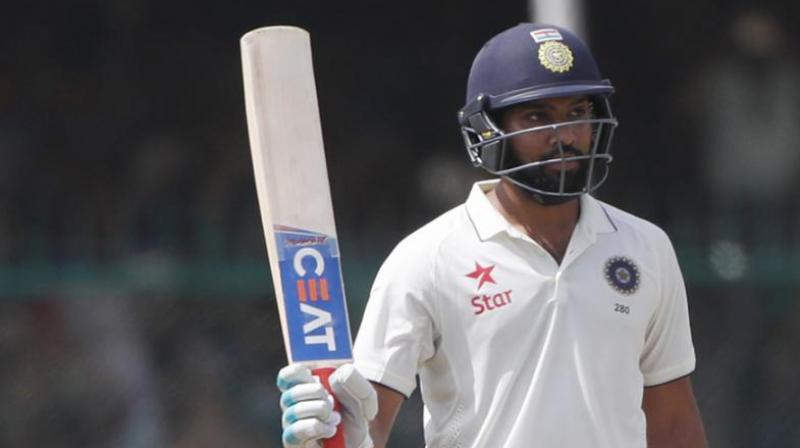 Rohit, 32, has cemented his place at the top of the batting order in the Twenty20 and 50-over formats and finished with the most number of runs in the World Cup in England recently. (Photo: AP)

Mumbai: India must get the limited-overs opener, Rohit Sharma, to serve the role in test cricket too, former captain Sourav Ganguly has said as the team ponder on their combination for Thursday’s first test against West Indies in Antigua.

Rohit, 32, has cemented his place at the top of the batting order in the Twenty20 and 50-over formats and finished with the most number of runs in the World Cup in England recently.

The only player in the world with three double hundreds in one-day internationals, Rohit bats in the middle order in the longest format but has never really flourished as a Test batsman.

He was dropped following a poor return in South Africa in early 2018 when he scored 78 runs in four innings. He played two tests in Australia at the end of the year, missing one with injury and the other due to the birth of his child.

India are without regular opener Prithvi Shaw, currently serving a doping ban, while Mayank Agarwal, who has played just two tests, is the regular opening batsman in the squad alongside KL Rahul.

The two tests in the Caribbean, which also marks the beginning of the World Test Championship for both sides, will present another opportunity for Rohit to try and cement his spot and Ganguly believes it should be at the top of the order.

“... the major decision is whether they want to play Rohit or Rahane,” Ganguly, who played 113 tests, wrote in a column published in Thursday’s Times of India newspaper.

“Rohit was in blistering form in the World Cup, but in tests in South Africa and Australia, he was ‘on and off’. Rahane was not his usual self in Australia.

“My suggestion would be to let Rohit carry on his good form from the World Cup and settle in the opener’s slot while Rahane continues his good work of lending stability to the middle order.”

India will also have to choose between experienced wicketkeeper Wriddhiman Saha, who was recalled after being out injured for more than a year, and the young Rishabh Pant for the wicketkeeper’s role.

Saha’s replacement Pant has used his chances well and hit a century in an Oval test last year while also smashing an unbeaten 159 against Australia in Sydney in January.

“After his impressive showing in test cricket in Australia and England, Rishabh Pant should be starting ahead of Wriddhiman,” added Ganguly.