The BCCI Ombudsman DK Jain, on Tuesday, had passed an order to reduce the life-ban on S Sreesanth to 7 years. 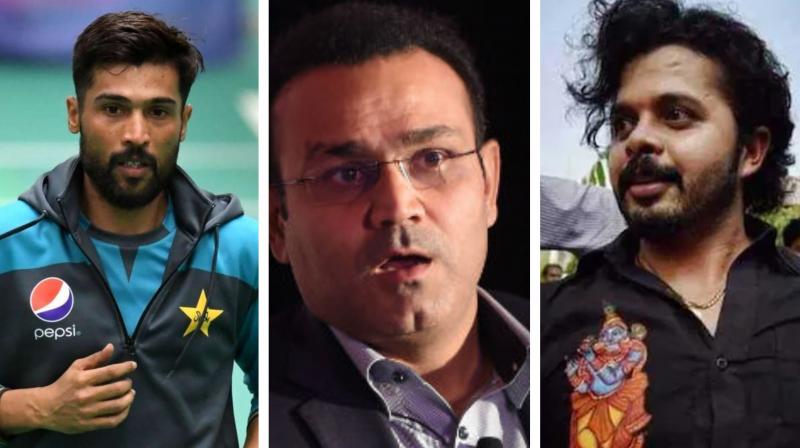 When asked about Sreesanth’s hope of playing international cricket, he said, “He has to play domestic cricket first,” (Photo: AFP)

Mumbai: The BCCI Ombudsman DK Jain, on Tuesday, had passed an order to reduce the life-ban on S Sreesanth to 7 years. His ban will end on 13th September 2020. Sreesanth is planning on making a comeback to the Indian cricket team as soon as his ban ends.

Virender Sehwag too had a say on this situation. In an event in New Delhi, Sehwag said that he is happy for the bowler. When asked about Sreesanth’s hope of playing international cricket, he said, “He has to play domestic cricket first,”

He was later asked about Mohammad Amir and how he had immediately made his comeback in international cricket in 2016 after a ban of five years. On this, his peculiar reply was, “Pakistan me kuch bhi hota hai.”

Earlier, Sreesanth had told ESPNCricinfo that, “I am a huge fan of Leander Paes to start with. For his age and fitness, he is showing the way (even) right now. So I should not give up. Even at 38, Ashish Nehra played the World T20 [2016]. I am only 36. So I still have another year to make the comeback. I don’t think age is a factor.”

After hearing the news of his ban being reduced, he had said, “I am extremely delighted with what I have heard now. Thanks to each one of my well-wishers who prayed for me and the prayers have been answered. I am 36 now and next year I will be 37. I have 87 Test wickets and my aim is I want to finish my career with 100 Test wickets. I am confident that I can return to the Indian Test team and always wanted to play under Virat Kohli.”