Prasad also said the BCCI forgot to release a press release on its website addressing the replacements. 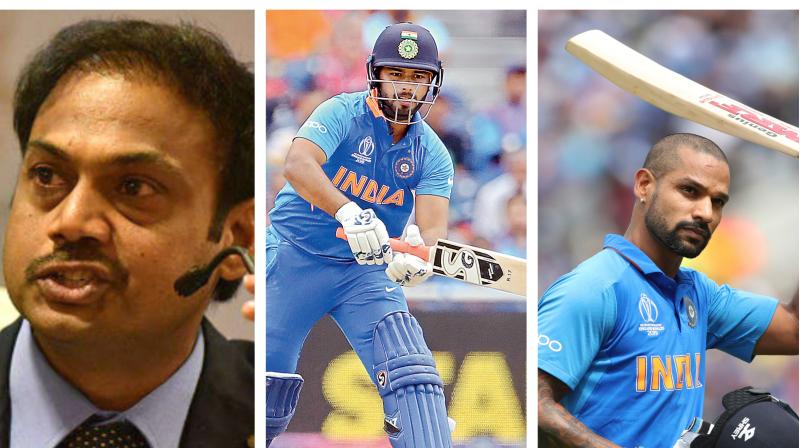 MSK Prasad also disclosed why KL Rahul was promoted to open the batting for India, while Vijay Shankar was reserved for the number four position. (Photo: AP/AFP/PTI)

Mumbai: During India’s team selection for the West Indies tour, chief selector MSK Prasad revealed why Rishabh Pant was brought in to replace injured Shikhar Dhawan during the 2019 World Cup. Prasad also disclosed why KL Rahul was promoted to open the batting for India, while Vijay Shankar was reserved for the number four position. After Shankar got injured, he was replaced by un-capped Mayank Agarwal.

Clarifying on the same, MSK Prasad said there was no ambiguity in replacing injured players during the 2019 World Cup. Prasad also said the BCCI forgot to release a press release on its website addressing the replacements.

A lot of eyebrows were raised after Rishabh Pant replaced injured opener Shikhar Dhawan and KL rahul was promoted to open the batting. Despite all the doubts, Prasad justified the replacements in the middle of the squad announcements for the West Indies.

“With regards to the selection, there is a policy that in between the series or mega events like the World Cup, I don’t take press conferences which has led to a lot of speculation,” Prasad stated on Sunday.

“When Shikhar Dhawan was injured, we already had a reserve opener in KL Rahul. At that juncture, we didn’t have a left-hander at the top. The team management requested for a lefthander. We had no other choice other than Rishabh Pant. We knew his capability. That’s the reason why we had to bring in a left-hander.

Lastly, Prasad said, “Subsequently, when Vijay Shankar was injured, why an opener was brought in... that’s the confusion. IN the game against England, KL Rahul fell on his back and he didn’t take the field. There was so much of worry factor. At that juncture, a mail was written that we need a back-up opener. We looked at some of the openers. Some were not in form and some were injured. That’s when we went to Mayank Agarwal.”