BCCI names team for West Indies tour; Kohli to lead team in all

The series will start on August 3 with Twenty20 game at Fort Lauderdale in Florida and conclude with second Test in Jamaica. 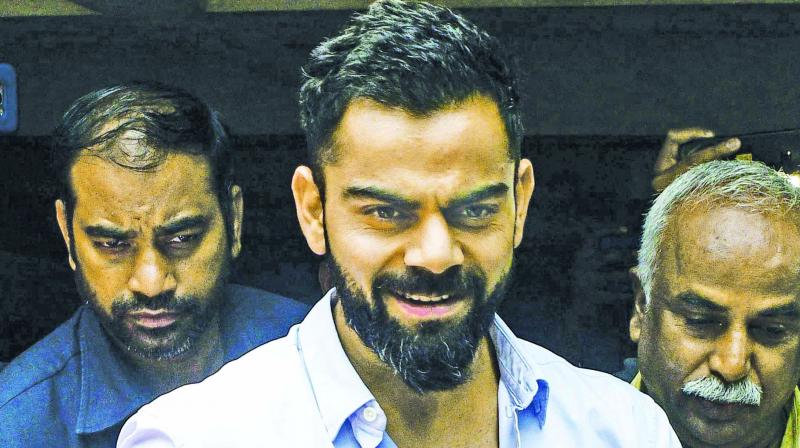 Mumbai: Indian selectors have blooded youngsters for the upcoming West Indies tour following the shock exit from the World Cup. Wicket-keeper batsman Dinesh Karthik who played just two innings in the World Cup has been axed from the limited-overs side, while Mahendra Singh Dhoni has opted out of the entire West Indies tour, starting on August 3.

Team India are scheduled to play three T20Is, three ODIs and two Tests. The series will start on August 3 with Twenty20 game at Fort Lauderdale in Florida and conclude with second Test in Jamaica.

Hardik Pandya who has been grappling with groin issues has been “rested” for the entire tour to “manage his workload”. Pace spearhead Jasprit Bumrah has been also rested for T20Is and ODIs to pave the way for youngster Navdeep Saini. He will, though, play in Tests along with Mohammed Shami, Ishant Sharma and Umesh Yadav.

Rookie leg-spinner Rahul Chahar has been picked for the first time to join his sibling Deepak Chahar in the T20 squad. Rajasthan’s Rahul had a good domestic season and played a crucial role in Mumbai Indians’ fourth Indian Premier League triumph earlier this year. He will form spin attack in shortest format with Krunal Pandya and Washington Sundar.

Manish Pandey and Shreyas Iyer make a comeback into the limited overs squad through their consistent performances for India A. The duo is likely to be considered for the vacant No 4 spot. Vijay Shankar was the selectors No. 4 pick for the World Cup but he hasn’t fully recovered from the toe injury sustained during the quadrennial event and isn’t part of the Indian squad across all formats.

Senior opener Shikhar Dhawan made a comeback to India’s limited overs squad after recovering from a thumb fracture he sustained during the World Cup. But he has been ignored again for Tests. Mumbai batsman Prithvi Shaw, who made his International debut against West Indies last year, is yet to recover from hip injury prompting selectors to show faith in new opening Test pair of KL Rahul and Mayank Agarwal. Rohit Sharma also makes a comeback to the Test squad so does wicket keeper batsman Wriddhiman Saha. The Bengal wicket keeper underwent a shoulder surgery to recover from an injury sustained during the 2018 IPL and has recovered fully.

He will give competition to Rishabh Pant who has sealed his Test spot for now due to overseas hundreds against England and Australia. Pant is part of all three formats for the West Indies tour.

Contrary to speculations, Virat Kohli will tour West Indies and will remain the skipper in all three formats.  Rohit will remain his deputy in ODIs and T20Is and Ajinkya Rahane will remain vice captain in Tests.

Kedar Jadhav has retained his place in the ODI squad despite facing criticism during the World Cup.