Rohit Sharma’s Blues did an outstanding job to defend their lowly 129/ 7 to restrict Rising Pune Supergiant to 128/ 6. 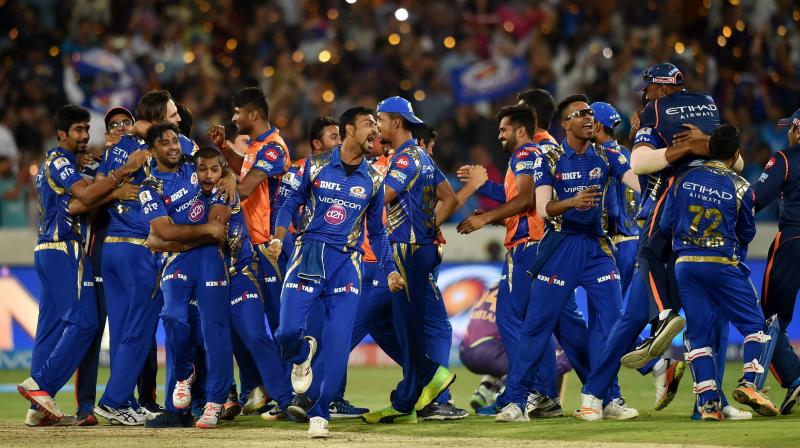 Hyderabad: Mumbai finally showed Pune who the Big Brother is, beating their nemesis in a low-scoring thriller by one run to emerge Indian Premier League champions for the third time on Sunday night. What should have been a canter for Pune turned into a nail-biter, as the Mumbai machine roared to life in the second half.

Rohit Sharma’s Blues did an outstanding job to defend their lowly 129/ 7 to restrict Rising Pune Supergiant to 128/ 6 and spark off ecstatic celebrations at the Rajiv Gandhi International Cricket Stadium here. It was the fourth IPL title for Rohit — three as Mumbai Indians captain and one when he was a Deccan Chargers player, in 2009.

His opposite number Steve Smith led from the front to stroke a 50-ball 51 but his fall in the last over with seven to get proved costly. Ajinkya Rahane’s 44 at the top too went in vain as Pune made a mash of what should have been a modest chase, in the middle overs. Pune’s heart stopped beating when Washington Sundar was run out on the last ball going for a desperate third run that would have forced the game into a Super Over.

Earlier, the pugnacious Pune pack ganged up to hunt down Mumbai, tearing them into bits in the first half. Barring a fine 47 (38b, 3x4, 2x6) from Krunal Pandya and 24 (22b, 4x4) from captain Rohit Sharma, the batting card had nothing bright on it. Mumbai’s total was the lowest in an IPL final for a team batting first.

Pune got off the blocks in style. Left-arm seamer Unadkat bowled brilliantly to concede just three runs in the first over, followed by Sundar who crammed the batsmen to give away only four. The pressure soon got to them — Parthiv Patel tried to force the pace off a slower one by Unadkat but managed only to hole out to Shardul Thakur at mid-on on the first ball of the second over. Three balls later, Simmons departed, falling to a fantastic catch in the follow-through — Unadkat picking the ball inches off the ground as Mumbai slipped to 8/2 in the third over. Rohit hit four boundaries off Lockie Ferguson’s first over and looked set for more before walking back to the dugout as Shardul came up with a ballerina balancing act on the deep mid-wicket boundary to pull off an outstanding catch off leg-spinner Zampa.

That the Mumbai captain took an eternity to make his way out of the ground pointed to the dire straits his team was in, at 56/4 in the 11th over.

Pollard showed great promise by pummelling the first delivery he faced into the second tier of the pavilion but a clever field placement saw him snapped by Manoj Tiwary at long-on in the same over. Zampa was understandably over the moon.