Sports   Cricket  22 Apr 2019  Twitter hails Dhoni despite losing against RCB, calls for Dhoni to be made the PM
Sports, Cricket

Twitter hails Dhoni despite losing against RCB, calls for Dhoni to be made the PM

Dhoni smashed 84 runs of 48 balls while chasing a target of 162, which involved 5 fours and 7 sixes in his aggressive display of batting. 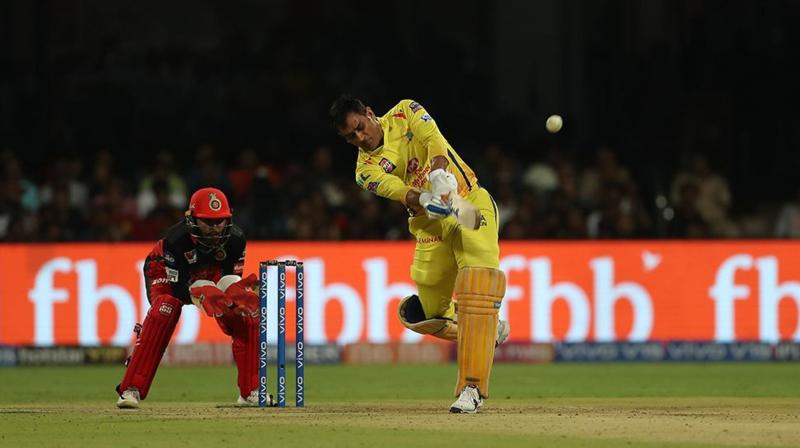 Due to the early collapse of CSK’s batting line-up, the team was down at 28-4 when the skipper walked to the crease in the sixth over and stayed till the end of the chase. (Photo: BCCI)

MS Dhoni yet again played the role of a saviour for CSK, as he steered the team almost to the brink of victory at Chinnaswamy.

Dhoni smashed 84 runs off 48 balls while chasing a target of 162, which involved 5 fours and 7 sixes in his aggressive display of batting. Despite scoring such a knock and remaining unbeaten, Dhoni’s heroics went in vain as CSK was denied a win due to the final ball run-out.

Despite CSK losing the match, Dhoni’s scintillating knock was applauded all over the twitter, with some even calling the skipper to be made the Prime Minister of the country.

Dhoni’s knock was enough to prove that why he still is an integral part of the team, ahead of the World Cup 2019.

Chasing a target of 162, CSK needed 26 runs from the last over which was bowled by Umesh Yadav. MS Dhoni completely changed the match in CSK’s favour by smashing four and three sixes against Yadav.

CSK needed only two runs from the last ball, but Dhoni was unsuccessful to make a contact on the last delivery which was a slower one.

Parthiv Patel was the top-scorer for his team, scoring 53 runs in 37 balls, as RCB managed to put a score of 161 on the board. With this win, RCB has acquired six points from their ten matches and still are sitting at the bottom of the league.

Due to the early collapse of CSK’s batting line-up, the team was down at 28-4 when the skipper walked to the crease in the sixth over and stayed till the end of the chase.

Post the match, many fans on Twitter started calling Dhoni to be made the next Prime Minister of the country.

Not sure if he stands for elections ,but if he does,my vote goes to @msdhoni
MS Dhoni for PM. One fine day. #Dhoni

There won't and there cannot be a Captain like Dhoni.
Dhoni for PM!#MahiMaarRahaHai #ThereISaidIt #LoveLoveLove

@msdhoni you are a freak!!! This years Vivo IPL just keeps on giving #SelectDugout @StarSportsIndia

There is Dre Russ school of batting and @msdhoni university of batting. @IPL

Dhoni and Rayudu were successful in putting up a 55 run partnership for the fifth-wicket, easing the pressure for the team.