Srikkanth seemed pretty happy with the composition of the 15-member squad for the World cup, which he believes has potential to win the WC. 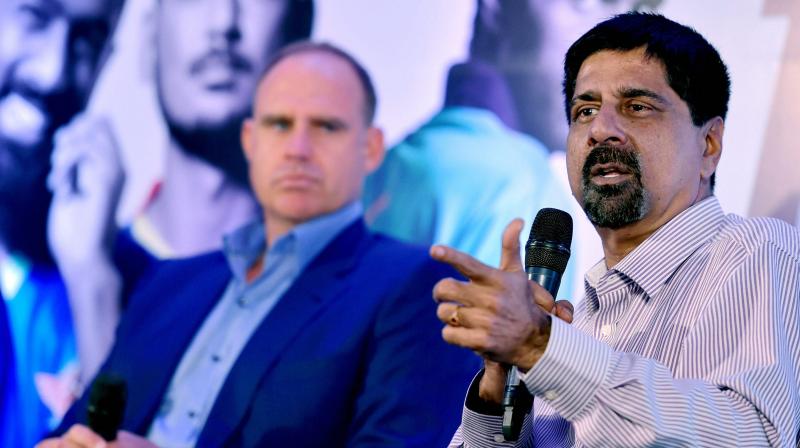 Srikkanth, a key member of the 1983 World cup winning team, who was also the head of selection committee during the 2011 World Cup. (Photo: PTI)

New York: Former India opener and chairman of selectors Krishnamachari Srikkanth loves the fact that current captain Virat Kohli never shies away from taking responsibility, which is a hallmark of a good leader.

Srikkanth, a key member of the 1983 World cup winning team, who was also the head of selection committee during the 2011 triumph feels that Kohli's aggression complemented by Mahendra Singh Dhoni's calm will again bring back the World Cup.

"We have a fantastic leader in Virat Kohli, who leads by example. A good thing about him is he takes up responsibility. So King Kohli will do it (again) along with the cool cucumber Dhoni," Srikkanth told PTI during an interaction.

Srikkanth seemed pretty happy with the composition of the 15-member squad for the World cup, which he believes has all the ingredients to emerge victors.

"It's a superb combination of exuberance, passion, calmness together. The Indian team should not put any pressure on itself and play with a sense of self-belief."

Srikkanth, who was also a chairman of selectors for the 2011 World Cup winning squad said all great Indian cricketers is defined by one characteristic trait.

The former Indian captain was present at an event arranged by ICC Cricket for Good in collaboration with UNICEF called #OneDay4Children.

The initiative will use the influence and reach of the cricket World Cup to help children learn, play and be healthy. The money raised will support UNICEF's work for children in cricket playing nations across the world.

There will be activities for children throughout all 48 matches of the world cup, peaking with a day of celebration during the England vs India game on June 30 at Edgbaston.

"Cricket is a great unifying factor and it gives you a lot of lessons. You develop your personality, life skills, learn about stress management, leadership, communication and team work," said Srikkanth.

"Sports itself is an education. You can't be just a bookworm nowadays. Children have to play sports and be healthy. Sports is an important part of school curricula because if you want to shine in life as a human being, you need to be good in sports. Cricket teaches you all these things," he added.

"Our most ambitious charity project to date and we know that cricket's one billion fans will come together to help build a better world for every child," ICC Chief Executive, David Richardson, said in a statement.

"It is a shared belief that cricket has an incredible power to raise vital funds and inspire and empower millions of children," Executive Director Unicef UK, Mike Penrose said.