The left-arm wristspinner sits at seventh in the bowlers’ rankings in one-day internationals, one spot ahead of colleague Yuzvendra Chahal. 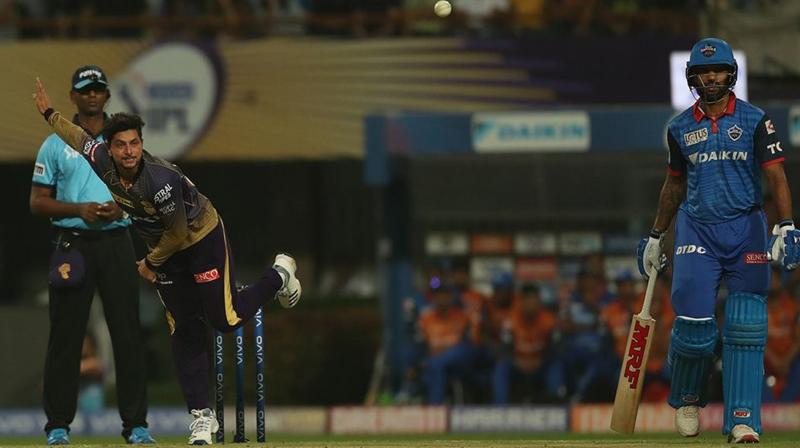 Kuldeep has taken four wickets in nine matches at an economy rate of 8.66 while bowling 33 overs for the Kolkata Knight Riders. (Photo: BCCI)

Mumbai: Kuldeep Yadav is expected to lead India’s slow-bowling attack in the World Cup but his poor form in the ongoing Indian Premier League (IPL) could become a headache for Virat Kohli’s men with just over a month left before the 50-over tournament.

The left-arm wristspinner sits at seventh in the bowlers’ rankings in one-day internationals, one spot ahead of spin-bowling colleague Yuzvendra Chahal.

The duo have emerged as India’s frontline spinners and named in the 15-man World Cup squad alongside left-arm spinner Ravindra Jadeja.

The wily 24-year-old has 87 wickets from 44 ODIs at an enviable average of less than 22. He took 12 wickets in the 2017 edition of the IPL and five more last year but has endured nightmare this season.

Kuldeep has taken four wickets in nine matches at an economy rate of 8.66 while bowling 33 overs for the Kolkata Knight Riders, who have lost five matches on the trot and are placed sixth in the eight-team league.

He was dropped for Sunday’s outing against Sunrisers Hyderbad after the mauling he received against Royal Challengers Bangalore on Friday during which he took 1-59 in his four overs.

“Definitely a form issue, he didn’t stand up for us in the previous game. That’s why we had to give him a break and get him back fresh,” KKR captain Dinesh Karthik said after his team’s loss on Sunday.

Despite the difference in formats, the IPL is the only competitive cricket left before the World Cup-bound Indians leave for England.

Kuldeep has always looked to be attacking, tempting batsmen with his flighted deliveries and in the process conceding some extra runs, but the assault by England all-rounder Moeen Ali on Friday left him broken.

The left-handed Moeen smashed Kuldeep for three sixes and two fours in a 27-run over before falling on the last delivery, leaving the bowler teary-eyed and dejected on the field.

Bangalore and India captain Kohli was at the other end witnessing Kuldeep’s misery and would hope his ace spinner will regain both his guile and confidence before India begin their quest for their third World Cup title with a match against South Africa on June 5.