The hosts have now levelled the three-match T20 series 1-1. 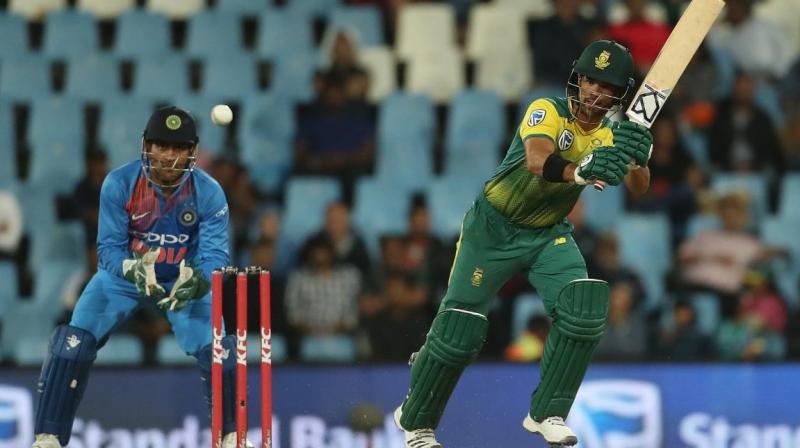 Captain JP Duminy remained unbeaten on 64 as he led the hosts to a six-wicket win in the second T20 on Wednesday. (Photo: BCCI)

Centurion: Powered by a 30-ball 69 from unheralded Heinrich Klaasen and a match-winning unbeaten half-century from skipper JP Duminy, South Africa defeated India by six wickets in the second Twenty20 International to level the three-match series at 1-1 on Wednesday night.

Set a challenging target of 189, South Africa rode on local boy Klaasen's 69 off 30 deliveries and skipper Duminy's unbeaten 64 off 40 balls to chase down the score in 18.4 overs. The Indian bowlers, especially leg-spinner spinner Yuzvendra Chahal, found it difficult to grip the bowl with constant drizzle pouring in for most part of the South African innings.

South Africa made a modest start to their chase with openers Reeza Hendricks (26) and Jon-Jon Smuts (2) sharing 24 runs for the opening wicket. But left-arm pacer Jaydev Unadkat (2/42) broke the partnership when he induced a leading edge in the fourth over from Smuts and it was gleefully accepted by Suresh Raina.

To make matters worse for the hosts, Hendricks departed in the final ball off the next over when he was holed out by Hardik Pandya at deep square leg off Shardul Thakur.

However, credit should go to Klaasen and Duminy who brought South Africa back into the match with a blazing 93-run stand for the third wicket which came off just 49 balls after they were down to 38 for 2 at one stage.

Klaasen used the crease to perfection and struck three boundaries and as many as seven sixes during his fiery knock in front of his home crowd. Duminy played the second fiddle and gave Klaasen the perfect support from the other end as the wicket-keeper batsman went hammer and tongs.

After bringing South Africa in sight of victory, Klaasen finally departed when he top-edged a Unadkat delivery straight to Dhoni behind the stumps in the 14th over. Thereafter Duminy took the onus on himself to guide South Africa home and together with Farhaan Behardien (16 not out) shared unconquered 48 runs for the fifth wicket to seal the series-levelling victory.

Duminy was cool as cucumber as he never panicked after Klaasen's dismissal and finished off the chase in style with two consecutive sixes of Unadkat. Earlier, Manish Pandey and Mahendra Singh Dhoni slammed quickfire half-centuries to guide India to a challenging 188 for four. While Pandey remained unbeaten on 79 off 48 balls, veteran Dhoni made 52 off 28 deliveries.

The duo shared 98 runs for the fifth wicket in just 9.2 overs to take India to the commanding total. Sent into bat, India were dealt a severe blow in the first ball of the second over when Rohit Sharma was caught plumb in front of the wicket for a duck by Junior Dala (2/28).

But thereafter, Shikhar Dhawan (24 off 14) came to the party and clobbered Chris Morris for two fours and as many sixes in the third over over to up the ante. Raina (31 off 24) matched his partner stroke for stroke and hit right-arm pacer Dane Peterson for three boundaries in the next over to take India to 40 for one after four overs. With his pacers going for runs, skipper Duminy brought himself on to the attack in the next over but was welcomed by Dhawan with an exquisite pull to the midwicket boundary. Duminy, however, got his man in the next ball as Dhawan hit a full toss straight to Farhaan Behardien at mid-on.

India received a big blow in the next over when skipper Virat Kohli gloved a rising Dala delivery straight to Klaasen behind the stumps. Thereafter, Raina and Pandey added quick 45 runs off 31 balls for the fourth wicket to take India forward. But the dangerous-looking partnership was broken by Andile Phehlukwayo in the 11th over when he had Raina LBW.

After Raina's dismissal, Pandey and Dhoni mixed caution with aggression to take India forward. The duo took time to settle down but once they got their eyes set, they clobbered the South African bowlers to all around the park.

While Pandey struck six boundaries and three sixes during his knock, Dhoni was not far behind his younger partner as he found the fence four times and over it thrice.