Adam Zampa captured three for 25 at a crucial stage as Australia went on to win by 41 runs. 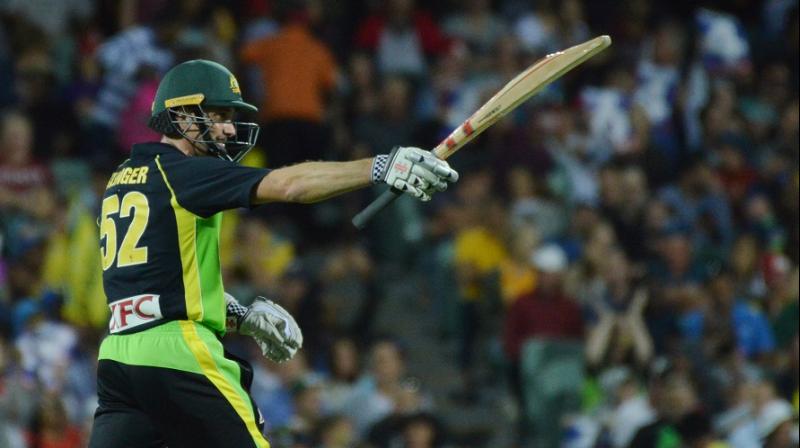 Michael Klinger proved the mainstay of the innings with 62 from 43 deliveries with six fours and a six. (Photo: AFP)

Man-of-the-match Zampa, who was left out of the previous match as the Sri Lankans won to clinch the three-match series, captured three for 25 at a crucial stage as Australia went on to win by 41 runs.

Openers Aaron Finch and Michael Klinger hit half-centuries as the Australians, with their leading stars in India for this week's Test series, set Sri Lanka 188 runs to win.

But the Sri Lankans could not reproduce another of their sensational late innings comebacks where they won the first two T20 games off the last ball.

Sri Lanka's chase was given early impetus by Dilshan Munaweera, who smacked 37 from 25 balls, but from 41 without loss in the fourth over the tourists lost traction and slid to 76 for four in the 10th over.

Zampa claimed the vital wicket of man of the series Asela Gunaratne, leg before wicket for four in the 10th over and the tourists were unable to arouse another of their sensational finishes to beat Australia's total.

Gunaratne slammed a pulse-racing 84 to power Sri Lanka to a last-ball victory against Australia on Sunday after clubbing 52 off 37 balls in the opening win in Melbourne.

It was Sri Lanka's first defeat in six T20 internationals in Australia.

Skipper Finch was dropped by Munaweera before he had scored on the fifth ball of the Australian innings and went on to cash in with 53 off 32 balls with three sixes and five fours.

Klinger proved the mainstay of the innings with 62 from 43 deliveries with six fours and a six.

The opening pair put on 79 runs for the first wicket.

Ben Dunk (28 from 21 balls) and Travis Head (30 from 16) contributed useful knocks to get to 179 for two before a late flurry of wickets cost Australia a chance to top a 200 total.

Sri Lanka claimed four wickets for eight off the final 11 deliveries with Lasith Malinga taking two for 35 and Chamara Kapugedera taking three catches in the deep.