India miss out on cleansweep against England, lose 3rd ODI by 5 runs

India still won the three-match series 2-1 after their victories in the first and second ODIs in Pune and Cuttack. 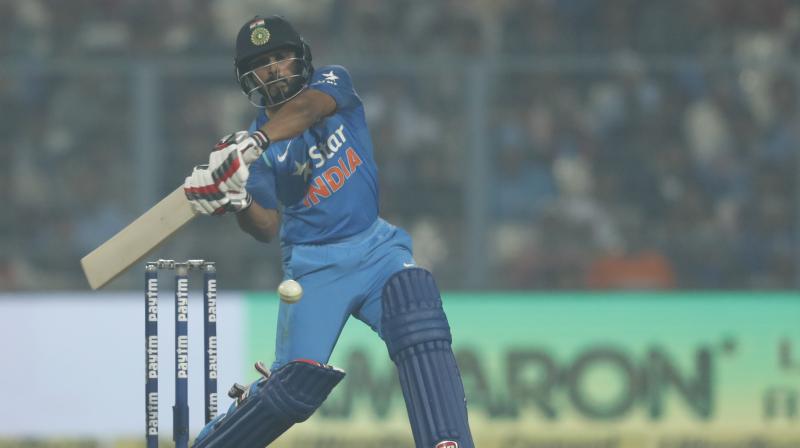 Kedar Jadhav (90 off 75 balls) was on the verge of single-handedly taking his side to a memorable win at the Eden Gardens. (Photo: AP)

Kolkata: India lost the plot in the final over after nearly pulling it off as England narrowly beat the hosts by five runs in a thrilling third and final ODI to prevent a clean sweep here on Sunday.

Kedar Jadhav (90 off 75 balls), who had helped India win the first ODI with a superb century, was on the verge of single-handedly taking his side to a memorable win as he hit a six and four in the first two balls of the final over but failed to rattle up the required 16 runs to lose the nail-biting match at the packed Eden Gardens.

All-rounder Ben Stokes, who was hit for four sixes in the fateful World T20 final at the same venue nine months back, had an emotional redemption as he scored 57 and took 3/63 to help England win the nail-biting match.

Chasing 322 for a win, India were cruising along with 27 needed from the final three overs but the match turned in England's favour in the 48th over with the home side scoring just four runs from it while losing the wicket of Ravichandran Ashwin (1).

India still won the three-match series 2-1 after their victories in the first and second ODIs in Pune and Cuttack while England notched up their first win in this Indian tour.

They had lost the five-match Test series 4-0 preceding the ODI contest.

Now the two sides head for the three-match T20 International series beginning on January 26 in Kanpur.

Under hazy conditions with plenty of swing and seam movement on offer, India lost the in-form Virat Kohli for 55, while Yuvraj Singh departed for 45 but Jadhav, who scored a career-best 120 in the first ODI in Pune, kept them in the hunt.

With 16 needed from the last over, Jadhav went deep into his crease to dispatch Chris Woakes over extra-cover for a six and followed it up with a boundary. Drama unfolded as Woakes brilliantly bowled two dot balls and removed Jadhav in the next ball when he holed out straight at deep point.

Six runs off last ball was seemingly a tall ask for Jasprit Bumrah as he could score any run and England clinched their first victory on the tour.

It was another 300-plus run affair as the three-match series went into the record books with a total of 2090 runs that eclipsed 1892 runs scored in the Afro-Asia Cup in 2007.