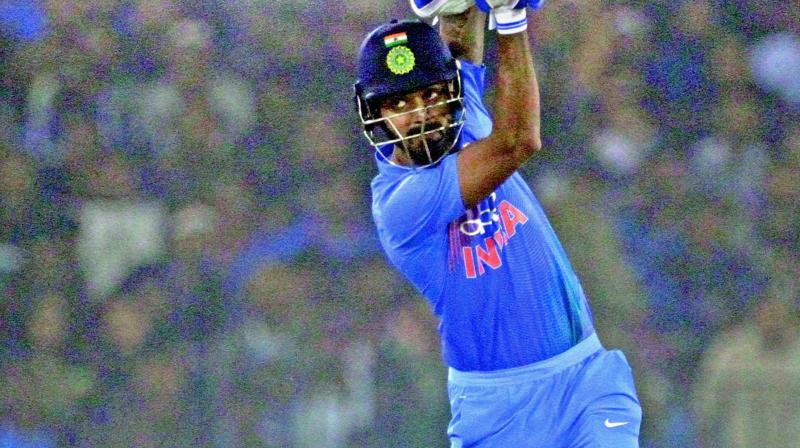 Cuttack:  Spin twins Yuzhuvendra Chahal and Kuldeep Yadav  ripped out the heart of Sri Lanka’s batting to bowl India to their biggest ever T20 win, by 93 runs, in the opening T20 game here on Wednesday.

Legspinner Chahal took 4/23 and Chinaman bowler Yadav finished with 2/18 as the visitors fell apart in a stiff run chase. India had posted 180/3 after being asked to bat.

Seamer Hardik Pandya cleaned up the tail to finish with 3/29 as no Sri Lankan batsman was allowed to get going.

Rahul smashed 61 off 48 balls to lay a solid foundation for the challenging total after the hosts were invited to bat in the first of the three matches.

But it was Dhoni (39) and Manish Pandey (32) who took the attack to the opposition bowlers during their unbeaten 68-run stand for the fourth wicket.

Dhoni hit four fours and a six during his 22-ball blitz while Pandey also hit the bowlers to all parts of the ground during his 18-ball stay.

Earlier Rahul, who replaced Shikhar Dhawan in the XI, put on a crucial 63-run stand with Shreyas Iyer, who made 24, after India a lost an early wicket.

Angelo Mathews got skipper Rohit Sharma caught at mid-on for 17 to check India’s surge after the openers gave the team a brisk start.

Rahul, who hit seven fours and a six, carried on with his attacking play as he reached his second T20 fifty in 34 balls, prompting skipper Thisara Perera to rotate his bowling options.

The ploy worked as Sri Lanka took two quick wickets including that of Rahul and also managed to stem the flow of runs. Perera bowled Rahul on a well-disguised slower delivery.

But Dhoni and Pandey finished off the innings with a flurry of fours and sixes as India got 66 runs in the last five overs.

The visitors, who lost the preceding one-day series 2-1 on Sunday, made four changes after their eight-wicket defeat in the Visakhapatnam ODI.

They brought in paceman Dushmantha Chameera, debutant left-arm quick Vishwa Fernando, all-rounder Dasun Shanaka and batsman Kusal Perera. “We didn’t bat well in the third match (and) in the second match we didn’t bowl well. Now we just have to move on and play our own game. We can beat anyone,” Perera said at the toss. India captain Rohit Sharma said he also would have bowled first had he won the toss but believed his team was capable of handling any situation.