I would say it's a complete performance from the time we were put under pressure in the first Test, says Virat Kohli. 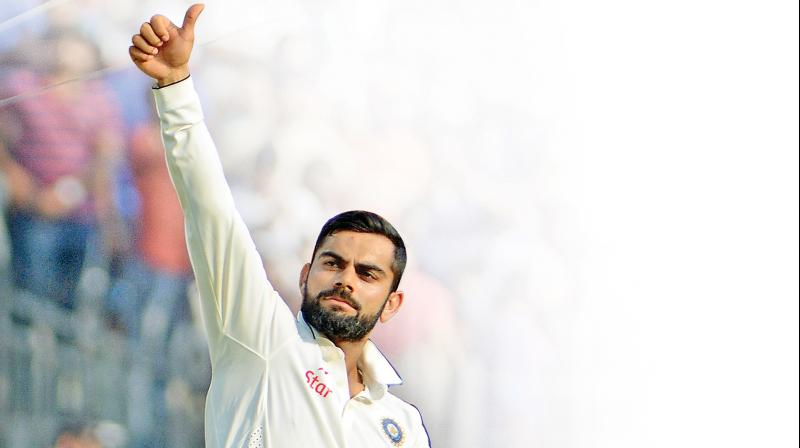 Chennai: The contrasting emotions that the outcome of any sporting contest can engender in the rival camps couldn’t have been more revealing than on the fifth day of the fifth Test between India and England here on Tuesday. After inflicting a whopping innings and 75-run defeat on England to win the series by a handsome 4-0 margin, the victorious Virat Kohli spoke like a leader embodying the virtue of fulfilment at completing a task with consummate perfection.

His counterpart, Alastair Cook, meanwhile, looked like he would have rather wanted the earth to cave in and gobble him up than to live with the agony of a 0-4 taint besmirching his legacy as a leader of victory-starved men. Cook has, on more than one occasion, stated that he would like to part ways with captaincy and surely this isn’t the annulment he would have foreseen, if at all it comes to that.

Although he was adjudged the man of the series, Kohli wanted to regard this series triumph as a collective effort. “I would say it’s a complete performance from the time we were put under pressure in the first Test. We came back strongly to win the next four Tests. What is even more gratifying is that three of those wins have come despite my losing the toss. The lower-order contribution is something that stands out for me in this series,” said the victorious Indian skipper.

Kohli, who made it abundantly clear that he didn’t view this series as a chance for retribution for losing to England the last three times they met, parried the question on his counterpart’s immediate future. “It’s not for me to answer (on Cook’s plight). He has played enough Test matches and captained long enough to know what works for him,” replied Kohli.

There have been many stand-out performers for the hosts during the course of this series, but looking back at this match, Kohli couldn’t look any further than the man of the match Karun Nair and another contender for that award in Ravindra Jadeja. “I haven’t seen much of Karun at the first-class level. But I have seen him bat in the IPL against world-class bowlers. And he is someone that has always showed gumption. I haven’t seen a current Indian batsman who could pull off the different varieties of sweep so expertly. He is just the complete package. It’s important to back players like Karun. He has exceeded not just our expectations but everyone else’s as well,” praised Kohli, before shifting his attention to the other match-winner Jadeja.

“We never look at the situation that Jadeja is playing in Ashwin’s shadow. Jadeja prides himself on his performance. He wants to excel in all conditions and make a telling impact. Ashwin himself will tell you the significant role Jadeja has played in helping him effect those breakthrough’s from the other end. Those two together have bowled well in tandem for us this whole season,” analysed the captain.