Ind vs Eng: Jaddu leaves England on all fours

The 4-0 result was India’s fifth consecutive series victory and it also stretched the unbeaten run of Virat Kohli and Co. to 18 matches. 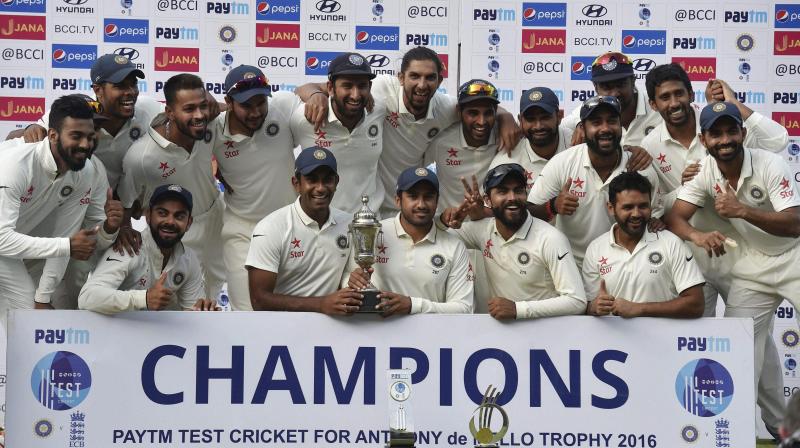 Chennai: India’s final Test match of the year had all the ingredients of a blockbuster. After four days of run fest that featured India’s highest Test total and only the second triple century on Indian soil, the contest suddenly veered towards a gripping final session with a spinner plotting the dramatic turn of events.

When England went to lunch with both their openers, Alastair Cook and Keyton Jennings, intact with 97 on board, a dull draw seemed the only possible result on a flat track. But Ravindra Jadeja’s mesmerising spell — a career-best 7/48 —  fired India to an incredible victory, by an innings and 75 runs, here at the M.A. Chidambaram Stadium on Tuesday.

The 4-0 result was India’s fifth consecutive series victory and it also stretched the unbeaten run of Virat Kohli and Co. to 18 matches, a feat that no other Indian side had achieved before.

Kohli said his team couldn’t have asked for a better year than 2016. “Apart from a couple of setbacks — ODI series in Australia and T20 World Cup, it has been a memorable year for Indian cricket. It’s something that I am really proud of, especially when the team is going through a transition. We won the Asia Cup, one-day series against New Zealand and all the Test series that we played. But this is just a foundation for the future,” he added.

Despite posting a healthy total of 477 in the first innings of the fifth and final Test, England surrendered to Jadeja’s persistence to be bowled out for 207 with just nine overs and about half an hour left for survival. From Moeen Ali’s departure at 192 for five, England could add only 15 runs for the remaining wickets.

Even though there were a few rough patches on the leg stump line, Jadeja was surprisingly not introduced until the 20th over in the morning session. Kohli said he persisted with R. Ashwin because both the English openers were left-handers and the off-spinner, in fact, had pinned them down with his probing deliveries. Parthiv Patel and K.L. Rahul put down a catch apiece in the morning.

“When we realised that we wouldn’t get much help from the wicket anymore, we brought in Jadeja because he provides that extra pace on the ball. It took time to understand the situation and luckily we had enough overs to bowl them out,” said Kohli.

Jadeja continued his stranglehold over Cook by removing him for the sixth time this series, denting the Test veteran’s good record against left-arm spinners in the process. Cook missed his half-century by a run when he flicked a wider delivery straight into the hands of leg-slip fielder Rahul. Jadeja then ran through the English top order to leave them 129 for four.

The canny left-arm spinner caught Keyton Jennings (54) on his own bowling and trapped the talismanic Joe Root (6) before pulling off a stunning catch, running back, to dismiss Johny Bairstow off Ishant Sharma. To remove Root, India needed the help of the DRS. As the review suggested the ball that pitched in line would have hit the off-stump, on-field umpire Simon Fry had to reverse his original decision of not out.