Sports   Cricket  21 Nov 2019  'The challenge is to play under lights with pink ball', says Daniel Vettori ahead of day/night Test
Sports, Cricket

'The challenge is to play under lights with pink ball', says Daniel Vettori ahead of day/night Test

Bangladesh have four-seamers in their current line-up and they will play a crucial role for the team in the second Test. 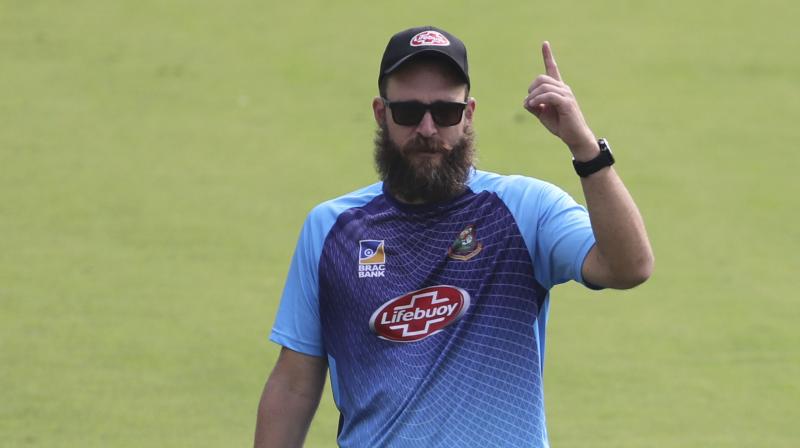 Daniel Vettori did not leave spinners out of the talk and said that they will also play a major role in the game. (Photo: AP)

Kolkata: Ahead of the first-ever day/night Test against India, Bangladesh spin bowling coach Daniel Vettori said that it will be a challenge to play under lights with the pink ball.

"Pink ball plays relatively normal at this time (morning) of the day. I think the challenge will be how much the Test match is played under lights. Sunsets quite early here 4:00, 4:30 pm so that will the time when the pink ball comes into play," Vettori told reporters here.

"My experience is based on watching on TV, the twilight and dusk will be an exciting period of the Test match. That will be the period when tactically teams will try different things. Wicket is very good and the last half of the session will be very interesting," he added.

Bangladesh have four-seamers in their current line-up and they will play a crucial role for the team in the second Test as the pink ball moves a lot under lights, allowing pacers to attack more aggressively.

"Four fast bowlers are very excited. That's the nice thing they don't get excited too often. They are coming in groups to bowl. It is a different SG pink ball. It will be a joy for the whole team to play the first pink-ball Test match," Vettori said.

Vettori did not leave spinners out of the talk and said that they will also play a major role in the game.

"I still think spin bowlers play a big part in the nature of the game. In the first two sessions, spinners could really be important. Both teams played two spinners in the last game. So they are important for the makeup of both sides. I don't see teams going too far away from them because in a majority of Tests spinners are required at some stage of the game," Vettori said.

"Indians have always been dominating against overseas spinners. Particularly in the last three or four years, any spinner that has come to this part of the world has been put under a lot of pressure. That's is through the nature of wickets and the skills Indian batsman have," he added.

India registered an emphatic win in the first Test by an innings and 130 runs and will now face Bangladesh in the second Test at Eden Gardens from November 22.