Pakistan won the toss and chose to bat on a hot and humid morning in Brisbane. 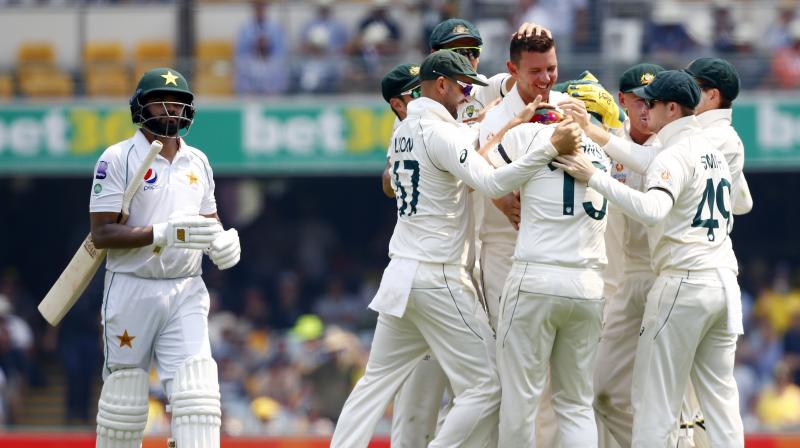 Pakistan openers Azhar Ali and Shan Masood reached 57 without loss on the opening day of the first cricket Test against Australia at the Gabba in Brisbane on Thursday. (Photo:AP)

Brisbane: Pakistan openers Azhar Ali and Shan Masood reached 57 without loss on the opening day of the first cricket Test against Australia at the Gabba in Brisbane on Thursday.

Pakistan won the toss and chose to bat on a hot and humid morning in Brisbane, but skipper Azhar saw no demons in the notoriously lively Gabba wicket.

Azhar and Masood, on 28 and 21 respectively, began cautiously against the Australian pace duo of Mitchell Starc (0-19) and Josh Hazlewood (0-19), who bowled quickly but without ever really troubling the Pakistan openers.

The Australian fast men -- Starc, Hazlewood and Pat Cummins (0-5) -- struggled to find a good length and were often too short, with Azhar and Masood content to let many of the deliveries pass harmlessly through to the keeper.

The visitors crawled to 33 at the first drinks break and took almost two hours to reach 50, bringing up the half-century opening stand with a Masood boundary through square leg in the penultimate over before lunch.

Pakistan had earlier caused a major surprise when they left out experienced seamer Mohammad Abbas, opting instead for pacemen Shaheen Afridi, Imran Khan and 16-year-old Naseem Shah, who were impressive in their lead-up game against Australia A.

"It was difficult to leave out Mohammad Abbas," Azhar said at the toss.

"But sometimes form can take over and we know he's very good and our number one bowler, but at the moment these three pacers are doing the job and we picked them."

As expected, Australia brought in Joe Burns to open alongside David Warner and recalled Travis Head in the middle order.