At tea, England were 121 for three after Root had won the toss and repeated the team's intention to 'bat long'. 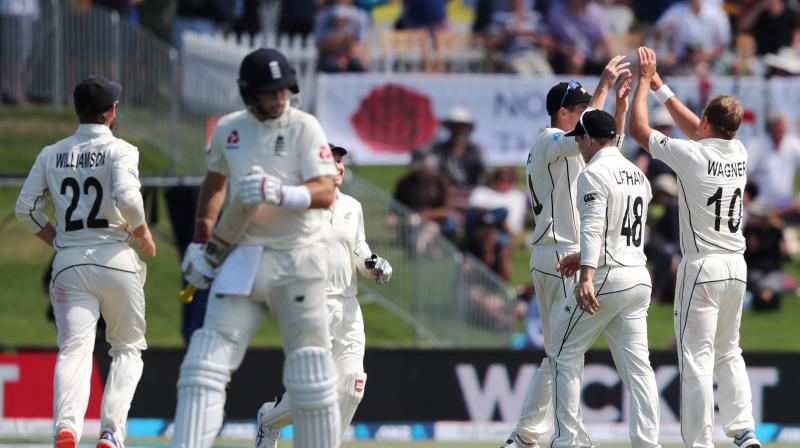 Joe Root's misfiring year continued when he was out for two in an otherwise satisfactory start for England in the first Test against New Zealand in Mount Maunganui on Thursday. (Photo:AFP)

Mount Maunganui: Joe Root's misfiring year continued when he was out for two in an otherwise satisfactory start for England in the first Test against New Zealand in Mount Maunganui on Thursday. Root, who on the Test eve denied captaincy was affecting his batting, faced 21 deliveries before finally getting off the mark at the batter-friendly Bay Oval pitch.

But with the next ball he nibbled at a wide Neil Wagner delivery and nicked the ball to Tim Southee in the slips. At tea, England were 121 for three after Root had won the toss and repeated the team's intention to "bat long". Rory Burns, albeit with a lot of luck, and Joe Denly played their part in forging the innings but the skipper, who now has three ducks and a two in his last eight innings, never looked comfortable.

Burns survived three chances on his way to 52 while Denly took the honours in an engaging bouncer battle with New Zealand short-ball specialist Wagner. Opener Burns brought up his fifth Test 50 with a four, but three balls later, he wafted his bat at a gentle Colin de Grandhomme offering and was caught behind.

Denly's confrontation with Wagner started with a boundary. Wagner responded with two bouncers, the second of which was top-edged but landed just short of de Grandhomme in the gully. Denly, refusing to be intimidated, pulled the next short ball to the boundary and gave two more rising deliveries the same treatment in the following over.

In Wagner's first spell after lunch, Denly faced 18 deliveries and scored 23 runs. By tea, he was not out 41 with Ben Stokes yet to score. All-rounder De Grandhomme, who took the wicket of Dom Sibley (22) in the morning session, delivers innocuous-looking medium pacers but was the most successful New Zealand bowler with two for 23, while Wagner has one for 41.