'Do not want Day/Night Test to become the only way to play Test matches': Virat Kohli

Kohli also compared the buzz for the day-night Test to the T20 World Cup match against Pakistan in 2016. 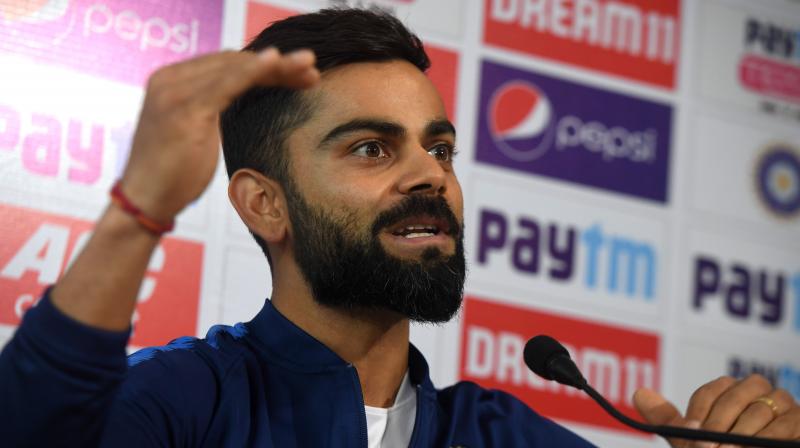 Virat Kohli said that it would be nice to see a Test match being played with around 80,000 spectators watching it. (Photo: PTI)

Kolkata: Ahead of India's first-ever day-night Test against Bangladesh, skipper Virat Kohli on Thursday said that pink ball matches should not become the only way to play the longest format of the game.

"If I do not like Test cricket, you cannot force me to watch it. People who like to watch the grind throughout the match, in my opinion, they should come to watch it. Yes, it is great to create more buzz for Tests, but if you have a Test calendar in which series are fixed, then you need to bring in sync into the game. This can be a one-off thing but it should not become a regular scenario," he added.

Kohli also compared the buzz for the day-night Test to the T20 World Cup match against Pakistan in 2016. He said that it would be nice to see a Test match being played with around 80,000 spectators watching it.

"It's a big occasion. We were excited about the pink-ball Test. Such big buzz for a match at Eden was created when we played against Pakistan in the T20 World Cup in 2016. In that match also, big players came to see it and in this day-night match also felicitation and all is planned. A big crowd will give a boost to all players. People will enjoy the spectacle. We are lucky that we will be playing India's first-ever day-night Test," Kohli said.

When Kohli was asked why the Indian team did not play the day-night Test against Australia in 2018, he replied that the side wanted to get a feel of the pink ball in home conditions first.

"Obviously we wanted to get a feel of pink-ball cricket, eventually it had to happen. You cannot bring these sorts of things before a big tour, you cannot play a pink-ball Test when you have not even prepared for the match. We have not played any first-class games with the pink ball, we wanted to experience it first in our own conditions. It cannot be a sudden thing, you need to prepare. It needed a bit of preparation, once you get a hang of it, then you can play the pink-ball Test," Kohli said.

"I think in general if you have not played with the pink ball before, it will be challenging throughout the game. It will require more concentration, more solid technique as compared to the red ball. The decision making will need to be more precise. The extra glaze on the ball is making it travel faster. It is going to be a challenge, it should excite everyone. Our skills will be tested in the match," he added.

Kohli also gave his view about how many practice games should be planned before the team plays a day-night Test on foreign soil.

"I think in India we have one big factor which is the dew. It will be considered throughout the match, you never know when the dew will come in. It is a big factor when you play a day-night Test in India. Invariably I think, the pink ball will tend to do a lot more in foreign conditions as compared to India," he added.

When asked about what should be done to make Test cricket popular again, he replied: "From our point of view, the only discussion we have had with our board is to how we can keep Test cricket right up there. It takes the commitment of the board and players. You need to do everything possible to keep up the standard of Test cricket".

"It is a partnership of the board and players, if you look at our contracts, Test cricket has been given a lot of importance. The other formats are taking care of themselves, I think the players need to be taken care of but you have to make sure that the players give their 120 per cent in each Test," he added.

India defeated Bangladesh in the first Test by an innings and 130 runs to consolidate their position at the top of World Test Championship (WTC) standings. The side currently has 300 points from six matches and they face Bangladesh in the day-night Test at Eden Gardens, Kolkata from November 22.