'Day-Night Test would be a challenge for the spinners': former cricketer K Srikkanth

Srikanth said that it needs to be seen whether skipper Virat Kohli decides to go in with Kuldeep Yadav instead of Ravichandran Ashwin. 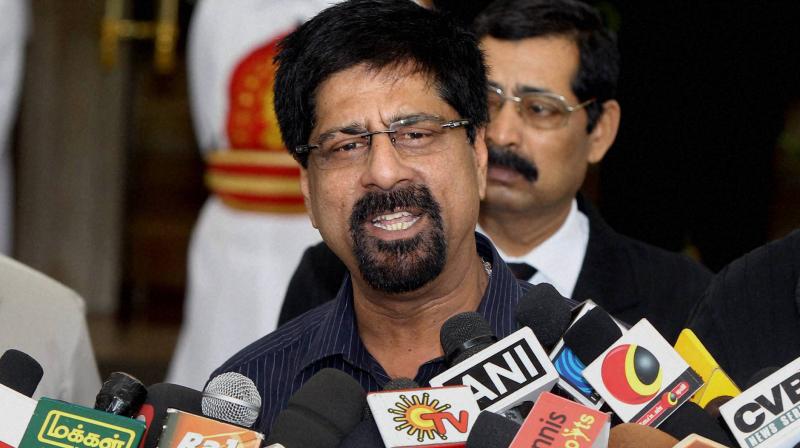 Krishnamachari Srikkanth Srikanth said that questions about the standard of cricket being played can arise if matches keep ending in three days. (Photo: PTI)

New Delhi: Former cricketer Krishnamachari Srikkanth on Thursday said that the spinners will face a challenge in the upcoming day-night Test between India and Bangladesh.

"With winter setting in, dew would be a factor, it has to be seen whether it nullifies the effect of wrist spinners. Whatever Duleep Trophy matches were played with the pink ball, they were all high scoring games. Typically spinners were completely out of the game and fast bowlers did not have much to do. The challenge would be there again for the spinners, when dew sets in, the challenge would then arise for cricketers," Srikanth told ANI.

When asked about what should be India's playing XI be, Srikanth said that it needs to be seen whether skipper Virat Kohli decides to go in with Kuldeep Yadav instead of Ravichandran Ashwin.

"I do not think India will tinker their batting lineup. It would all come down to whether the side will want to play a finger spinner or a wrist spinner. We have heard former cricketers saying that it would be difficult to pick the scrambled seam. It would have to be seen whether Kohli plays Kuldeep in place of Ashwin. By the look of it, fast bowlers will have a major role to play as the quality of ball looks like that," Srikanth said.

Srikanth said that questions about the standard of cricket being played can arise if matches keep ending in three days.

"Players would also be trying their best to adjust to these conditions. They are all professionals, they play all three formats of the game, the challenge of pink-ball cricket would be really different. Moving forward, if the results start coming in about three days instead of five, then the question of standard of the game would also rise," Srikanth said.

Srikanth also said that the pink ball Test would be a great spectacle for the crowd and it may be the way forward to bring people to the stadiums.

"It's a new trend, as things go, this is the way forward to bring the crowd to the stadium especially in India. It would be an eye-opener for many, the way ticket sales have happened, it is sold out for the first three days. But speaking in terms of the player, it would be a challenge to adjust to the pink ball first. From the spectator's point of view, it would be thrilling for them to watch the day-night Test," Srikanth said.

India defeated Bangladesh in the first Test by an innings and 130 runs to consolidate their position at the top of World Test Championship (WTC) standings. The team currently has 300 points from six matches and they face Bangladesh in the day-night Test at Eden Gardens, Kolkata from November 22.