Cook said a couple of 'good tosses' could turn England's fortune in the five-Test series, which they are trailing 0-1. 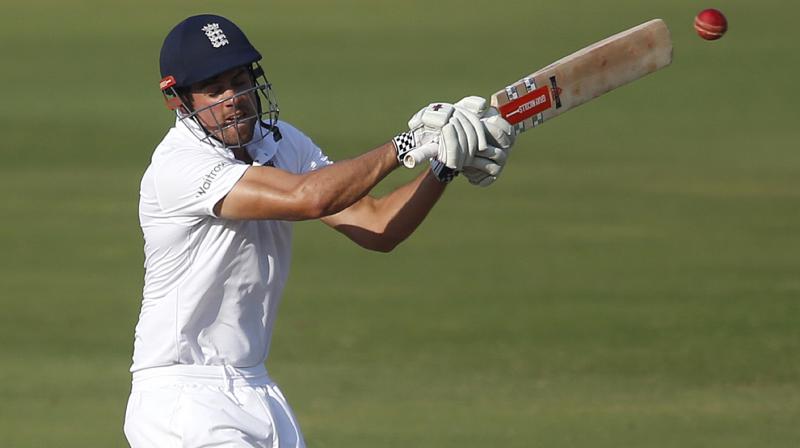 The scorecard may have indicated a huge English defeat but Cook said there were many positives to take from the match. (Photo: AP)

Vishakhapatnam: England skipper Alastair Cook, on Monday, said Virat Kohli's knocks proved to be the difference between the two sides after the visiting team's crushing 246-run defeat against India in the second Test.

"If you took Virat's runs out of the game – I know you can't do that – but we have put their batters under a lot of pressure," Cook said at the post match press conference.

Kohli followed up his first innings 167 with another 81 in the second essay to set a Herculean 405-run target for England and they were bundled out for 158 in 97.3 overs with India taking eight wickets in a little over one session.

The scorecard may have indicated a huge English defeat but Cook said there were many positives to take from the match.

"What's giving me belief is over 10 days of cricket we have competed very well in India in their conditions. Yes we have lost by a big margin but the margin of runs is different.

"We could have played more aggressively and lost by 150 runs or so. But we went that way," Cook insisted.

Counting on the positives before going into the third Test in Mohali, Cook said: "Adil Rashid has been excellent in these two games, a real step up for him. Ali bowled really well. Jimmy (James Anderson) is good on his comeback. So a lot of good things. We have got to put the whole game together to beat India. If we can get ahead of them in Mohali, then we can put pressure on them."

Cook said losing the toss was "massive" and quipped a couple of 'good tosses' will turn England's fortune in the five-Test series, which they are trailing 0-1.

"It was a massive toss to lose but in certain periods of game we played some good cricket. We can all agree it was a good toss to win. Anyone could see that. It's a disappointing loss but we can get ahead of the game then we can put India under pressure. We just got to do that right. We are still very much in the series. A couple of good tosses will help that, there's no doubt about that," said Cook.

"It doesn't guarantee any result but on these wickets, it's been very advantageous to bat first. The first day was the best day to bat. You saw the scoring rates declined as opposed to the first day. It was harder to score.

"And when you concede 455 and you're 80/5, it's a long way back. That cost us the game. But when you're behind it's always very hard to recover in these conditions. We did show some good skill and fight," he added.

On Stuart Broad availability for Mohali, Cook said it would be a "risk".

"I think it depends on how that injury settles. I think he was in a lot more pain than people know and showed a hell of a lot of character. We don't know enough about the injury yet because it's quite an unusual one and you're speaking to the wrong person about it. How much damage you can actually do to it, we'll know in the next 24 hours, 48 hours. But yes, if he plays, it will be a big risk."

Left-handed batsman Ben Duckett, who made his debut in the Bangladesh series last month, has been the weak-link and Cook said Jos Buttler may replace the 22-year-old.

"I think he does. Certainly something that the selectors will have a look at. It's hard cricket in your first few games. The difference, I think, is probably quite stark, I think from playing in Northamptonshire to playing here, suddenly every innings is scrutinised. That's the nature of the beast," he said as the youngster had scores of 13, 5, 0 in the last three innings.

However, Cook backed him, saying: "...Whether it's a technical flaw or not, people are aware of it and there is no doubt it affects guys.

"Ben is a really talented cricketer and I think we'll see a lot more of him in an England shirt. Whether he plays in Mohali or not, the selectors will have to take a call on that. But he's been working incredibly hard. He's the first in the nets this morning, last night. He's working hard on his game, and whatever decision, we'll see Ben Duckett scoring a lot of runs. He's too good a player not to."

England have another injury concern in Zafar Ansari as the left-arm spinner had a back spasm and did not bowl in India's second innings.

"He was recovering, he could have bowled yesterday but obviously Rash was bowling really well and Broady did a nine-over spell so actually, in one sense we didn't need him and it was probably better for his back. He's had a tough three days physically. We do think he's got a role to play, obviously physically we have to make sure he's alright. So we'll wait and see and will obviously try and pick a team that can win."