Pakistan coach Misbah-ul-Haq and bowling coach Waqar Younis were also targeted and blamed for engineering the ouster of Sarfaraz. 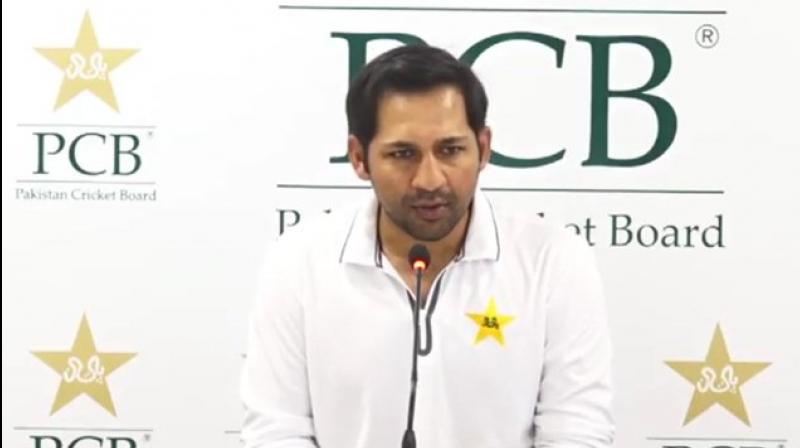 Sarfaraz Ahmed has been replaced as Test captain by Azhar Ali while Babar Azam will take over in T20s. (Photo: Twitter)

Karachi: Pakistan's former stalwarts on Sunday lashed out at the Pakistan Cricket Board (PCB) for acting in haste in removing Sarfaraz Ahmed as captain in all three formats of the game.

Most of the former captains and players termed the removal of Sarfaraz on Friday as unjust. Not surprisingly the head coach and chief selector Misbah-ul-Haq and bowling coach Waqar Younis were also targeted and blamed for engineering the ouster of Sarfaraz.

Sarfaraz has been replaced as Test captain by Azhar Ali while Babar Azam will take over in T20s. A decision on the one-day captaincy will be finalised in due course.

The wicketkeeper-batsman is also unlikely to be part of the touring Pakistan T20 or Test squad to Australia later this month.

Batting great Javed Miandad said since Sarfaraz had gained considerable experience as a captain in the last two years, he should have been given time to regain his form instead of just sacking him.

"Azhar's appointment as Test captain is okay but if the Board wanted to appoint Babar as white-ball captain, they should have first groomed him as I fear the burden of T20 captaincy will affect his batting," Miandad said.

Former Test batsman and ex-head coach and chief selector Mohsin Khan said, "He (Sarfaraz) took Pakistan to number one in T20 cricket and he is a fighter. This is a decision taken in haste and it could also affect the career of Babar."

Former captain Rashid Latif minced no words in stating that the Board had erred by making Babar captain of the T20 side.

"He is a selfish player and we have seen this in international cricket and now in the national T20 championship. Sarfaraz is not a selfish captain and sacrificed his position many times for the team. He did not deserve this treatment," he said.

Former skipper Moin Khan said he was shocked at the way the Board had treated Sarfaraz.

"He (Sarfaraz) has shown himself to be a fine captain and yes he was struggling a bit for form but when a senior player is under pressure you have to encourage and back him, not dump him like this," Moin said.

He noted that Misbah and Waqar had never been fond of Sarfaraz and with them in charge, this sacking was expected.

"I don't know from where these decisions are coming but they make no sense at all to me. Sarfaraz should have been relieved as Test captain but the Board should have given him some time as captain of white-ball cricket."

Another former captain Ramiz Raja, however, felt that the Board had taken a brave decision to appoint Babar Azam as T20 captain and said people defending Sarfaraz should accept his poor form in recent months as skipper.

"We were struggling in Test cricket, we did not reach semifinals of the World Cup. We lost to a Sri Lankan 'B' team in T20 cricket and his own form is on a decline. I think the Board acted properly by investing in a young player in the white-ball formats. If Babar develops into a good leader he can also become Test captain," he said.

Former fast bowler Shoaib Akhtar said Sarfaraz only had himself to blame for his ouster.

"I have been saying for a while now that he needs to be a brave captain and player. He has not been physically fit and he lacked leadership qualities," Akhtar said.