Former Australian all-rounder Shane Watson is blown away by the quality of the tamil nadu premier league. 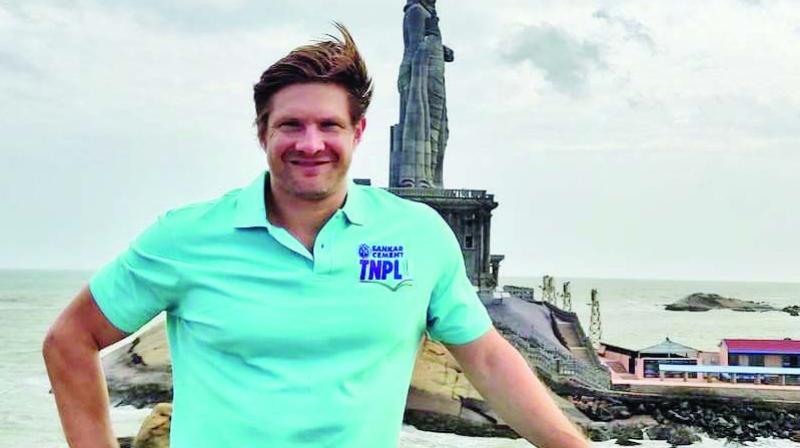 Shane Watson strikes a pose during his whirlwind trip to Kanyakumari.

A regular at the Indian Premier League since 2008, Shane Watson has continued to steal the spotlight with his brilliant displays for Chennai Super Kings. At 38, age is just a number for the Australian all-rounder, who was the top batsman in the last two IPL finals.

In the 2018 finale, Watson was the Man of the match smashing a 57-ball 117 not out to help CSK down Sunrisers Hyderabad. He almost did an encore in the 2019 final against Mumbai Indians scoring 59 runs but his dismissal resulted in CSK suffering an agonising one-run defeat.

Since his retirement from international cricket in 2016, Watson has been plying his trade in global leagues but he says his association with CSK, particularly with captain MS Dhoni and coach Stephen Fleming, ranks among his best so far.

The dashing cricketer who played 58 Tests, 198 one-day internationals and 58 Twenty20 Internationals for Australia, turned up for the Sankar Cement Tamil Nadu Twenty20 Premier League and was “blown away” at the manner in which the event has been conducted.

He believes it is the best platform for young cricketers from Tamil Nadu to make a mark. He also spoke about his time spent with CSK, life after retirement and Australia’s chances in the ongoing Ashes during a brief interaction on the sidelines of TNPL final.

What’s been your first impression of the TNPL?
I’m really blown away at how incredibly well-organised the tournament is. The quality of cricket is of a high standard. It’s just a great launching pad for these young cricketers in Tamil Nadu to be able to show their skills.

It’s inspiring hopefully for the next generation to realise that there’s an opportunity available and if you love what you do and work very hard. So, I think it’s a great way to make youngsters understand it’s within reach to achieve your dreams.

Do you feel that tournaments like the TNPL are an extension of that?
Of course it is, and that’s why everything flows down from the top. As we all know, CSK and Mr Srinivasan and everything that he filters down, believe in his leadership. People around him, they make sure that everything is of the highest quality. I’ve seen it straightaway with the TNPL with the way how it is run. We get to see how well the facilities are here, it’s like a small scaled-down version of the IPL. This is a great opportunity for these young guys to see how things do work at that next level, up at the IPL. And I hope the experience helps to continue to develop the quality of the upcoming cricketers.

What would be your advice to the young players playing in this tournament?
What I would say is, enjoy this opportunity. It’s not putting pressure on yourself to perform, it’s just going out and allowing yourself to express what you’ve got. It’s a great platform. Sometimes this might be the biggest opportunity you might get to be perform on stage. It is a pretty awesome stage here, you are on TV. And also the crowds these guys are playing in front of. Also, they have international Indian players playing with them as well like Ashwin, and Murali Vijay. It’s a great experience for these young guys to just go out and enjoy themselves.

You continue to be a very active player even after your retirement, so what keeps you going?
The love for the game keeps me going. I absolutely love playing, I love the opportunities that I have had throughout my career to be able to play for the teams that I have had and now to continue playing for some awesome franchise and awesome tournaments as well. So for me I still love the challenge of playing, I am still definitely learning all the time.

I love the challenges, it’s not just the technical skills but also the mental skills at this stage of my career. To be able to tap into the skills I’ve got, if I wasn’t firm on continuing all the way longer I wouldn’t have had the chance to play for CSK and meet the people I have been fortunate enough to meet and play with, to be able to get to know MS Dhoni and Stephen Fleming is certainly one of the highlights of my career across any team I have played yet. So I still love playing and contribute as much as I possibly can on or off the field. I am still fit enough and till I feel I can contribute I will keep playing.