Sreesanth thanks Supreme Court, BCCI after his ban gets reduced to 7 years

Sreesanth was banned by the BCCI for a lifetime in August 2013 along with his Rajasthan Royals teammates Ajit Chandila and Ankeet Chavan. 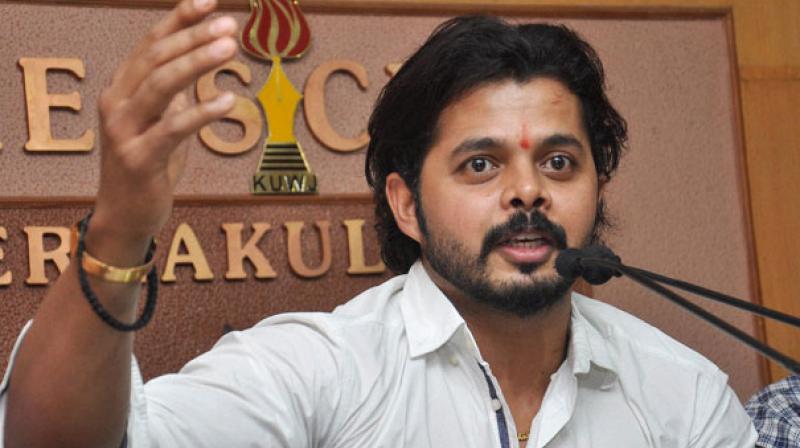 The 36-year-old said that the coming year will be used in a timely manner to fulfill some of the commitments made in the film industry and make a proper return to cricket. (Photo: PTI)

Kochi: After his life ban was reduced to seven years by the ombudsman DK Jain, Indian fast bowler S Sreesanth on Tuesday thanked the Supreme Court and the BCCI

"God has been extremely kind, thank you very much for all the support. It was a struggling phase but I have ruled that phase. Thank you very much whoever supported me or did not support me. Thanks to the BCCI, thanks to the Supreme Court, and Ombudsman DK Jain, for giving me an opportunity from next year," Sreesanth told reporters.

The 36-year-old said that the coming year will be used in a timely manner to fulfill some of the commitments made in the film industry and make a proper return to cricket.

"I need to get in the match fitness and my focus will be on the game. In the end last six years, I survived because of the entertainment industry. I have certain commitments, which I have to finish," Sreesanth said.

"It is great news for me. Now, I have a proper road map to follow. I will not disappoint any of those people who supported me, especially from Kerala. I'll make sure that I train really hard and make a comeback," he added.

Earlier, the BCCI's ombudsman Justice (Retd) DK Jain issued the order on August 7 but made the announcement on Tuesday that Sreesanth's ban will end on September 13 next year.

"I am of the view that banning Sreesanth from participating in any kind of commercial cricket or from associating with any activities of the BCCI or its affiliates, for a period of seven years with effect from 13.09.2013, i.e., the date from which, the period of ban imposed by the Disciplinary Committee had commenced, will meet the ends of justice," Jain said in an order that was issued on August 7.

Sreesanth was banned by the BCCI for a lifetime in August 2013 along with his Rajasthan Royals teammates Ajit Chandila and Ankeet Chavan for indulging in alleged spot-fixing in the Indian Premier League (IPL) that year.

Upon investigation, the 36-year-old was found guilty by the BCCI and the board had imposed a life ban on the cricketer, which was later challenged by Sreesanth in Kerala High Court which upheld the life ban. Sreesanth then moved to the apex court, pleading that the High Court verdict to be set aside.

On March 15, the Supreme Court set aside the life ban imposed on Sreesanth by the BCCI and asked the cricket body to reconsider his plea within three months.