Afghanistan's controversial campaign, marred by poor on and off-field decisions, has gone from bad to worse. 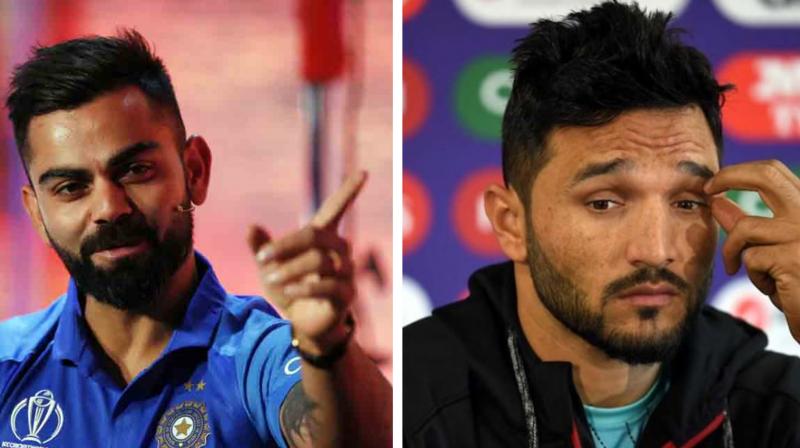 Hardik Pandya, whenever pushed up as the floater, has been a success while Mahendra Singh Dhoni has been rock solid behind the stumps. (Photo: Cricket World Cup/Twitter/AFP)

Southampton: India's star-studded line-up could well break a few batting records when they face the tournament's favourite whipping boys Afghanistan in what threatens to be another lopsided contest at the ICC World Cup, on Saturday.

One of the title contenders, India's match against Afghanistan could well be a glorified net session in which they would like to put up a resounding performance that not only eases their passage to the semi-final but also ensures a good net run-rate.

Afghanistan's controversial campaign, marred by poor on and off-field decisions, has gone from bad to worse. And they now face the onerous task of squaring off against a galaxy of world class players, whose performance graph is on the upswing.

India is one team that endured tougher matches right at the beginning and Virat Kohli's men have looked quite invincible in their one-sided wins against South Africa, Australia and Pakistan.

Such has been their dominance that even injuries to senior opener Shikhar Dhawan, speedster Bhuvneshwar Kumar or all-rounder Vijay Shankar have not had any impact whatsoever on the performance against the top teams.

Losing Dhawan due to a fractured thumb after his match-winning hundred against Australia was being seen as a big blow but KL Rahul's composed half-century against a rampaging Mohammed Amir dispelled any such doubts.

With Rohit Sharma in prime form, a fourth double hundred could be there for the taking against a hapless attack with their prime bowler Rashid Khan, horribly out of form.

Skipper Virat Kohli hit two half-centuries against Australia and Pakistan with such ease that the at least the first 35 runs in both the innings were scored before one even realised.

Shankar's injury is a slight concern but young Rishabh Pant, with his audacious approach, brings in a certain the X-factor that is difficult to ignore.

In case Shankar doesn't get fit in time, the fight for that slot will be between Pant and the seasoned Dinesh Karthik, who was team management's original choice in the squad of 15.

Hardik Pandya, whenever pushed up as the floater, has been a success while Mahendra Singh Dhoni has been rock solid behind the stumps and steady in front.

This match could provide Kohli with an opportunity to promote Kedar Jadhav up the order as he is one batsman in the line-up, who has played only eight balls over three completed matches.

India would need Kedar's batting on days when the top order might not click and Afghanistan gives the team management the best opportunity to give him quality match time.

Ditto for India's bowling, which is being touted as the most balanced in the competition.

"We don't treat any team lightly. Whether it's Australia or Afghanistan, we treat every team with equal respect. We focus on our strengths and what we need to do," team's premier bowler Jasprit Bumrah said.

Bhuvneshwar hobbled out with a stiff left hamstring after bowling only 16 deliveries against Pakistan. That hardly mattered as all-rounders Vijay Shankar and Hardik Pandya did the star turn with the ball.

Against Afghanistan, Mohammed Shami will get his first game in the tournament and his pace and movement could be more than a handful for the likes of Hazratullah Zazai, Hashmatullah Shahidi or Asghar Afghan.

The inexperienced Afghans may find Kuldeep Yadav or Yuzvendra Chahal's craft too hot to handle.

However, a spirited show against India will certainly boost Afghanistan's confidence and some competitive edge to one-sided contests, which have taken some sheen off the global meet.