Bangladesh mounted a spirited chase in pursuit of a 382-run victory target but ended on 333-8 to succumb to their 3rd defeat in 6 matches. 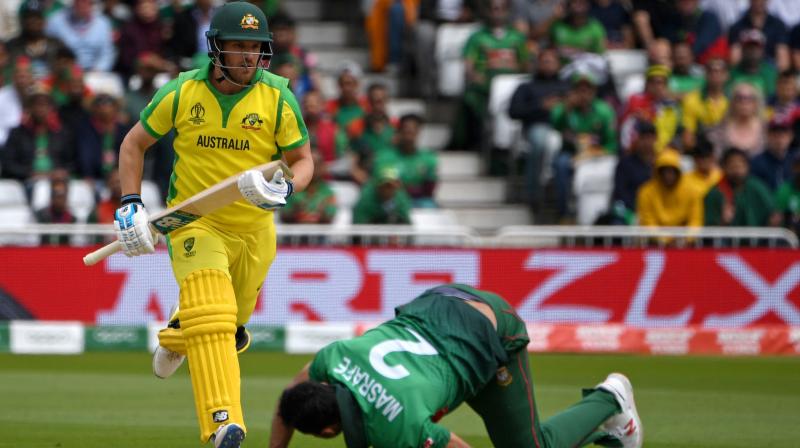 David Warner, dropped at backward point when on 10, smashed 166 and featured in a 121-run opening stand with skipper Aaron Finch (53) to lay the foundation for Australia’s imposing total of 381-5. (Photo: AFP)

Nottingham: Bangladesh’s inability to strike with the new ball cost them dearly in their World Cup match against Australia, skipper Mashrafe Mortaza said after their 48-run loss on Thursday.

Bangladesh mounted a spirited chase in pursuit of a 382-run victory target but finished on 333-8 to succumb to their third defeat in six matches.

David Warner, dropped at backward point when on 10, smashed 166 and featured in a 121-run opening stand with skipper Aaron Finch (53) to lay the foundation for Australia’s imposing total of 381-5.

“We created a few chances, which should have been taken, especially against a big side, you have to take those 50-50 chances,” Mashrafe said.

Warner and Finch saw off the first 20 overs without being separated, guiding Australia to 117 and both completing fifties.

Mashrafe reckoned it could have been completely different with an early break through.

“I knew that we needed a wicket at that particular time. They knew if they don’t lose wickets early, they can damage us. I think not picking a wicket was the main thing.”

Mushfiqur Rahim’s unbeaten century and fifties by Tamim Iqbal and Mahmudullah fuelled Bangladesh’s gallant charge but their second successive 300-plus total was not enough to upset the reigning champions.

In their previous match, Bangladesh chased down a 322-run target against West Indies with 8.3 overs to spare but Mashrafe said it was unfair to expect the batsmen to do it every time.

“It’s hard for the batters...350 is always difficult,” the all-rounder said.

“On this wicket, even 340 could have been chased down. The batsmen are showing their courage. If you look at our batting, I think everyone has been batting with some intent.”