Pakistan captain Sarfaraz Ahmed was caught on the wrong foot when he was seen yawning on camera in the middle of India vs Pakistan game. 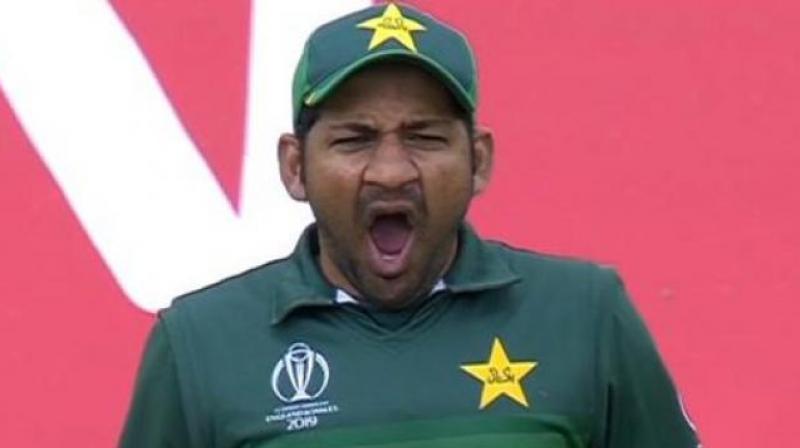 Pakistan’s next match, against South Africa, is at The Oval on Sunday. (Photo: Twitter)

Mumbai: Pakistan captain Sarfaraz Ahmed, who was caught on the wrong foot when he was seen yawning on camera in the middle of India vs Pakistan World Cup match on last Sunday has been provided practical tips by two doctors-one each from India and Sri Lanka-to prevent a yawn.

"Like some of the many bodily phenomenon which Medicine cannot explain with conviction and only theorize, yawning is one. Though it is well known that yawning is associated with less sleep boredom and tiredness, it is often but not always so. Medical conditions like sleep apnoea, obesity, migraine, stress, anxiety and stroke can cause excess yawning but surprisingly a majority of the times it may not have any cause.

Scientists site anything from providing more oxygen to the brain to brain cooling as the reasons why a person yawns but the exact etiopathogenesis remains unclear", Dr Zubin Vaid, the Medical Director as the Unique Hospital in Mumbai, explains.

My tips to the Pakistan skipper:

"The easiest and most effective way is to breathe in deeply and give out a prolonged exhalation, using more of the abdominal and diaphragm muscles rather than the chest. This can be repeated till such time that the yawning stops".

"Simultaneously think about something exciting and happy probably some memorable moments in your life".

"A glass of cold water or some cold beverage might help. Chew a mint or gum".

"Take a short nap ..even a 5-10 min nap can sometimes rewire your brain circuitry stopping the cycle of yawns".

Sri Lanka's Prof. Arjuna de Silva, the sports medicine expert, who has worked with the Sri Lankan cricketers, also believes that chewing gum and recalling the memorable events is a remedy to stop yawning.

Speaking exclusively over telephone from Colombo, he said, "First I think Safraz is a fantastic cricketer and I love his attitude. Yawning generally happens when we are tired or bored. However, it can happen for many other reasons as well.  In Safraz situation he had a big match against arguably the best Indian team ever so he can be forgiven for having a sleepless night before the match. Some people can yawn when their nervous or if they see anyone else yawning. Finally, Safraz is at risk for having obstructive sleep apnea (OSA). His BMI is 24.6. Asian cut off for BMI is 23".

"We need to know his neck size and whether he snores a lot. Anyone with day time sleepiness should be checked out for OSA and also have a Thyroid test".

Sarfraz should keep recalling the Champions Trophy victory over India two years ago. He should chew gum. It will help him concentrate and less likely to be distracted", he further added.

To quote Robert Provine, a pioneer on yawning research, yawning may have the dubious distinction of being the least understood, common human behaviour. Research over the years suggests that considering it as a mere act of boredom or drowsiness may not be justified till we find the definite details of underlying physiological importance.

Pakistan’s next match, against South Africa, is at The Oval on Sunday.