Can Mumbai topple Supergiant for their third IPL crown?

Can Mumbai topple Supergiant for their third IPL crown? 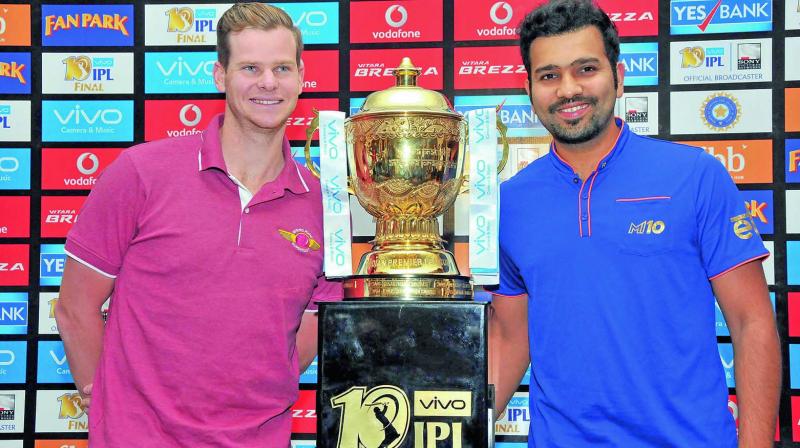 Hyderabad: This is it. All the sweat, sixes and slugfests over the past month-and-a-half in searing summer heat boils down to this big one in the IPL cauldron. Will the Blues band boogie? Or the Purple pack party? Well, the rhythm is surely gonna get you as Rising Pune Supergiant clash with flying Mumbai Indians in a blockbuster final that promises to set the stands rocking.

Pune have the psychological advantage though, having won all three of their matches against Mumbai this year — the home and away legs as well as Qualifier 1. The Blues will hope they are fourth time lucky.

However, in the last match played at this ground, a fortnight ago, Mumbai lost tamely to SRH while Pune have been the only team to win at the Rajiv Gandhi International Cricket Stadium this season, having beaten Sunrisers Hyderabad in the league stage. Strike bowler Jaydev Unadkat took 5/30 including a hat-trick maiden in the last over with SRH needing only 13 runs.

The venue also throws up some interesting facts. The RGICS has hosted only one final so far — the Champions League Twenty20 in October 2009 which featured three players from the current finalists. Two — Mumbai's Kieron Pollard and Lendl Simmons for Trinidad & Tobago — finished on the losing side while Pune captain Steve Smith was a member of New South Wales Blues who lifted the trophy. The Australian would surely love to fall back on history.

It is also at this ground, in the same tournament, that Pollard announced his arrival as the big ticket. He smashed an unbeaten 54 in 18 balls that included five boundaries and five sixes at a stunning strike rate of 300 per cent to snatch the match away from Steve Smith's NSW Blues in the league stage.

Two months later, the West Indian was the highest grosser at the IPL auction, pocketing $750,000 from his base price of $200,000 as Mumbai Indians picked, and have kept him close since.

Quite a few of the other Mumbai players — Rohit Sharma, Karn Sharma and Ambati Rayudu — too have fond memories of the RGICS. For Rohit, Karn and Rayudu, it was home during their stints with 2009 champions Deccan Chargers, 2016 winners Sunrisers and the Hyderabad junior and Ranji Trophy teams respectively.

Back to the present, Mumbai have a quite a few positives going for them in the current season. Pollard has hit the most sixes (21) from among the players in action on Sunday. Hardik Pandya has the highest number of runs scored in an over, 28, in the tournament. That those came against a Pune bowler in Ashok Dinda should be heartening. His brother Krunal has played a crucial role too. Besides, opener Parthiv Patel has been consistent with the bat and figures in the top 10 bracket.

Mumbai captain Rohit Sharma will want yorker men Lasith Malinga and Jasprit Bumrah, leg-spinner Karn Sharma and the plucky Pandyas to be a handful with the ball.

For Pune, it's been everyone's a hero game so far. Mahendra Singh Dhoni is a big match player, a dangerous one at that. Smith too is used to pressure, thanks to the India-Australia series that put him through fire prior to the IPL. He'd be keen to take something out of his Indian summer sojourn and will be eyeing that shiny Cup to sip champagne from.

Understandably, for he has a bubbly set of players who have been fizzing about. Unadkat, Washington Sundar, Rahul Tripathi, Manoj Tiwary, Shardul Thakur have punched way above their weight while pushing Pune to the top. Smith will ask his gritty mates land one last lethal blow on the big night.