Low scores could be a function of pressure on players or sluggish pitches or both. 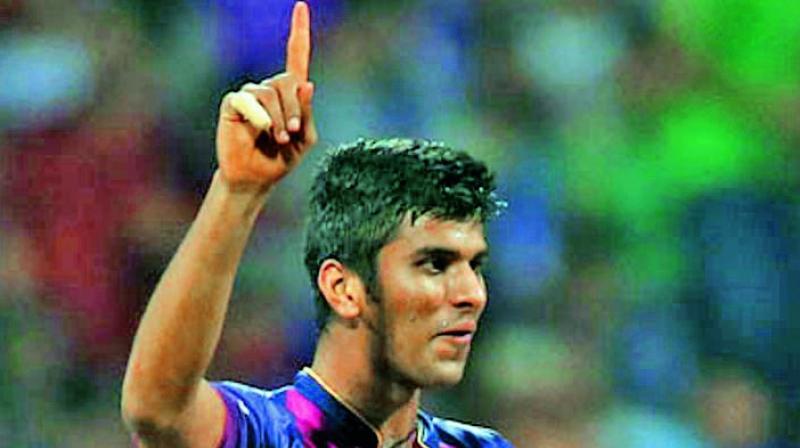 Mumbai and Pune found two unlikely heroes to lead them into the IPL final. Neither Karn Sharma nor Washington Sundar were first-choice spinners for their respective teams, but are now the X factors in Sunday’s face-off.

Karn’s inclusion in the eliminator against Kolkata caught everybody by surprise. I thought it was a blunder, for at this crucial stage of the tournament, Harbhajan Singh’s vast experience seemed the logical option.

But Mumbai’s selection tactic was proved right. Though Bumrah’s early strikes rocked Kolkata, their batting was deep enough to put up a defendable total. Karn quashed that possibility with splendidly controlled leg-spin.

Washington Sundar did something similar for Pune when they beat Mumbai in the first play-off. Brought early into the attack, he had the home team in tatters after dismissing Rohit Sharma, Ambati Rayudu and Kieron Pollard.

There is clearly more to Pune’s 17-year-old off-spinner than just an unusual first name. For someone so young, he has strong nerves to go with skill and has improved by leaps and bounds this IPL. But think of it, had R. Ashwin been fit, Washington may not have got a game!

There are some interesting aspects that emerge from the success of Karn and Washington which, notably that in T20 it is not just established players who win matches: just about anybody has an equal chance to play the stellar role.

Second, spinners have not been ‘finished’ by T20, as was feared by purists and critics; in fact, they seem to be thriving! And yes, the IPL is clearly of big help in unearthing and showcasing young Indian talent.

That said, the play-off matches this season have been disappointing. All three have been low scoring, two have been so one-sided as to become dull and the third got reduced to a virtual lottery because of unrelenting rain.

Low scores could be a function of pressure on players or sluggish pitches or both. In my opinion, it had more to do with pitches. And while flat pitches that make bowlers redundant are undesirable, if batting is severely restricted too, the appeal of limited overs cricket suffers.

It is the rain-affected match, however, which threw up the more serious issues: How long should playing conditions extend for a match to be decided? How fair/effective is the Duckworth-Lewis method in such circumstances? Is there a way to tweak D/L in T20?

While a result is always desirable, extending the deadline for a match must not make the procedure detrimental for the stakeholders involved: players, umpires, fans, vendors, broadcasters, sponsors etc.

This applies to all limited overs cricket, but is particularly relevant in T20. The whole concept revolves around T20 being compact where time is concerned. If a 3.5-hour match extends to 7 hours, it violates this concept.

If players have to be mentally and physically ready to perform at their best at 1.30 am, if spectators are expected to be present at the ground and still attentive, the entire match process becomes not just bizarre, but is reduced to a fiasco.

The D/L method is not the best way to get a result, but was introduced to ensure a result since there can’t be drawn matches in limited overs cricket. But in T20, this can lead to highly unsatisfying situations.

For instance, in the Kolkata-Hyderabad match, it would have been a travesty if rain had made play impossible. KKR would have been ousted despite having bowled superbly to restrict opponents to 128. But it was no less a travesty for Hyderabad, left to defend just 48 in six overs!

What’s the way out? Stephen Fleming, former New Zealand captain and currently coach of Pune in the IPL suggests that for the team chasing a target revised under D/L should also have a restriction on number of wickets they can lose.

For instance, if KKR had to chase 48 in six overs without losing more than three wickets, it imposes an onus on the team batting second which then gives a competitive edge to the match.

It’s a line of thought that deserves serious consideration.