‘Madras Miandad’ Dinesh Karthik does it for India

VVS Laxman said Karthik has become a match-winner now. “He played for India before Dhoni. 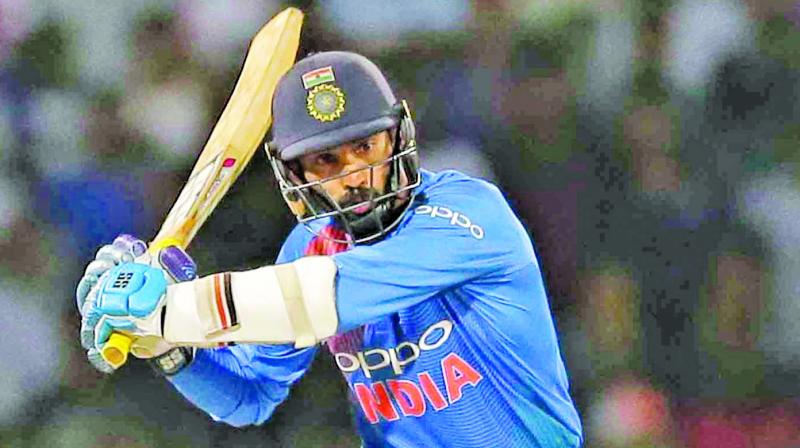 With a delirious last-ball six that helped India clinch the Nidahas Trophy, Karthik has joined an exclusive club of players such as Javed Miandad, Ryan McLaren, Nathan McCullum, Lance Klusener and Shivnarine Chanderpaul who have won international matches with a maximum off the last ball.

An incident from his wedding to Dipika Pallikal in 2015 would best sum up Dinesh Karthik’s persona. A dapper-looking Karthik and a pretty Dipika had stood face-to-face to exchange vows and the gathering was on the edge of their seats to catch a glimpse of the big occasion. Karthik took the diamond ring out of the box, only to drop it after a fumble. As Karthik, sporting a grin, rushed down to pick the bling that was rolling down the stage, the bride couldn’t stop giggling.

Being restless is something that Karthik seems to have been born with. On Sunday night, a million viewers witnessed it live on TV when he walked up to collect the Man of the Match award for his match-winning knock of 29 off eight balls. Karthik tripped over his feet while climbing up the podium, but not before bailing India out with his composed knock under immense pressure.

With a delirious last-ball six that helped India clinch the Nidahas Trophy, Karthik has joined an exclusive club of players such as Javed Miandad, Ryan McLaren, Nathan McCullum, Lance Klusener and Shivnarine Chanderpaul who have won international matches with a maximum off the last ball.

As the competition for the India middle-order is stiff, every match is a do-or-die for Karthik who made his India debut way back in 2004. He is the oldest member of the triumphant second-string side and has already made numerous comebacks.

The TN wicket-keeper batsman has transformed a lot in the last couple of years especially after he started working with Mumbai’s Abhishek Nayar. He has made a concerted effort to remain calm at the crease.

“Through these years, I have learnt the importance of staying calm. MS Dhoni is a great example of that. You learn different things from different people. One of the things I have learnt from MS, is the way he finishes matches,” said Karthik.

His former team-mate Zaheer Khan acknowledged the sea change. “It used to be a hyper version whenever he was in the middle,” said Zaheer. “He has learnt a lot of things but one thing remains unchanged. Like the little incident during the presentation ceremony. It is always happening to DK. For instance, we would hear a thud near the dressing room and DK would have accidentally knocked off something, or he would have taken a fall, or something would have fallen on him. So, these things haven’t changed even though a lot of other things have changed for the better. As a player he has come a long way,” added Zaheer.

VVS Laxman said Karthik has become a match-winner now. “He played for India before Dhoni. We always knew he had immense potential. That’s why we used to get frustrated whenever he failed to utilise the opportunities. I feel, in the last one and a half years, he has transformed a lot. You want players of DK’s experience to win you matches, not just playing a few cameos. It was a perfect opportunity for him and he did it in style,” said Laxman.

Laxman said the added responsibility of captaining Kolkata Knight Riders in the IPL-11 would hold Karthik in good stead. “It will help him play a lot more innings like this. The clear thinking speaks volumes about his maturity,” added Laxman.

India’s spectacular triumph in the Nidahas Trophy T20 tri-series in Colombo had a strong Tamil flavour. While Karthik pulled off a Houdini act in the final, the other two Chennai boys — Washington Sundar and Vijay Shankar — too played their part. With eight wickets and a staggering economy rate of 5.7, Washington was the most successful bowler of the tournament and was aptly rewarded with the Player of the Series award. Of the 20 overs Washington bowled in the tournament, 13 were delivered in the Powerplay.

For all-rounder Shankar, who had won a Man of the Match award in a league match, the final proved to be a little overwhelming, but he slammed a crucial boundary in the last over before making his way back to the dugout. Shankar didn’t get to bat in previous games.

Zaheer said Washington was the biggest positive of the tournament. “Vijay really showed talent with the ball. He needs to work on batting and learn to absorb pressure more. This experience will definitely help come handy in future,” he said.

Dinesh Karthik, Man of the Final:
Really happy to come out of this performance. Not winning the final wouldn’t have done justice to the way we have played this tournament. As I realised it wasn’t that easy to bat, all I needed to go for were boundaries. I was just trying to hit the ball. The Indian team right now is a tough place to get an opportunity, but once you get it, you’ve got to make the most of it. Full credit to the support staff for giving me the confidence.

Washington Sundar,
Man of the Series:
Definitely, it means a lot. I need to thank my family. Bowling in Powerplays is a challenging role, but when you’re playing for your country, you should be ready for challenges. I think I always wanted to read batsmen’s mind, and that’s what I’ve been trying to do these five games. My strength has been to stay calm under pressure. I do homework before every match and it has been effective for me.