Natarajan wants to pay off debts

The meteoric rise continued as he made his Ranji debut in 2015 against Bengal at the Eden Gardens. 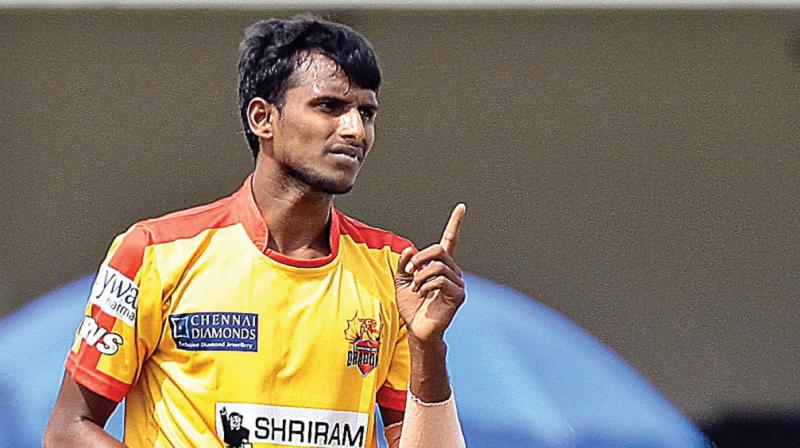 Chennai: T. Natarajan’s journey from a nondescript village of Chinnappampatti in Salem district to the glitzy Indian Premier League is nothing short of a fairytale. Cricket wasn’t Natarajan’s priority while growing up in a family that struggled all along to make ends meet. As the eldest of five siblings including three sisters, Natarajan was always worried about taking care of his family. His mother still runs a street-side snack stall, selling fried chicken, to support his father, a daily wage worker in a textile unit. After the IPL jackpot, life will never be the same again for Natarajan’s family.

“The first thing I told my parents was to stop working from tomorrow. In fact I have been telling them to do so ever since I started playing for Tamil Nadu. They have been shouldering the burden all these years,” said Natarajan.

As Kings XI Punjab’s Virender Sehwag completed the purchase of the left-arm pacer for a whopping Rs 3 crore from a base price of Rs Rs lakh, Natarajan couldn’t believe what he saw on TV. “I felt overwhelmed and would have cried had my parents been with me here,” said Natarajan who watched the IPL auction at the guesthouse of his employer, Chemplast Sanmar, where he has been given free accommodation for the past three years.

The 25-year-old said he would pay off the debts his parents have incurred to build a small house recently. “That would be a big relief for me. Three of my four siblings are still studying and one sister recently got married. And I’m not going to splurge on cars or bikes. My biggest worry now is how I’m going to repay faith Kings XI Punjab have reposed in me,” added Natarajan who is known for his lethal yorkers in death overs.

Things turned around pretty fast for Natarajan who was playing tennis-ball cricket in Salem before he moved to Chennai in 2011 to play lower division cricket. The meteoric rise continued as he made his Ranji debut in 2015 against Bengal at the Eden Gardens. But the jubilation didn’t last long as he was reported for suspect action in the same match.