Sports   Cricket  21 Jan 2019  How neutral are these curators in Ranji Trophy?
Sports, Cricket

How neutral are these curators in Ranji Trophy?

As Kerala celebrated their maiden entry into the Ranji semis, Gujarat skipper Parthiv Patel suggested that Wayanad pitch was dangerous. 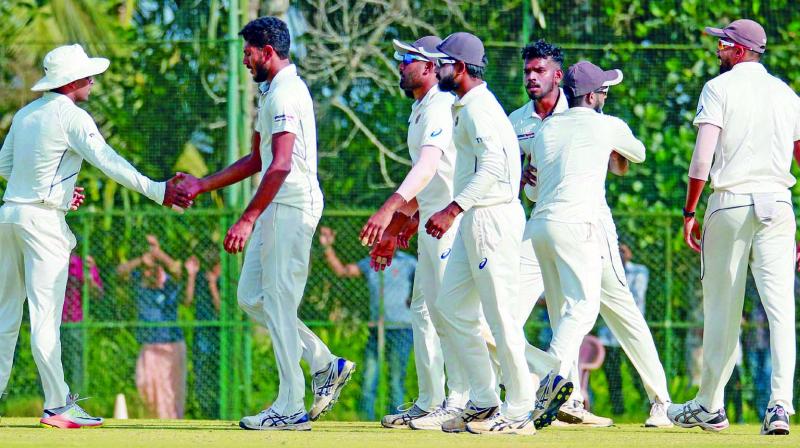 Kerala players celebrate a Gujarat wicket during the quarterfinal at Wayanad. (Photo: PTI)

Chennai: After the league stage of the Ranji Trophy concluded in the first week of January, BCCI’s general manager of cricket operations Syed Saba Karim had sent out a set of instructions to associations who geared up to host knockout matches. Karim reiterated the need to produce sporting wickets and thus sought support for neutral curators. While the two quarter-finals at Nagpur (Vidarbha beat Uttarakhand) and Lucknow (Saurashtra made a record chase against Uttar Pradesh) lasted the distance, Wayanad’s Krishnagiri pitch, where the hosts Kerala sealed the contest against Gujarat in two-and-a-half days, raised a few eyebrows. In the other last-four contest between Karnataka and Rajasthan, the teams had to negate spongy and uneven bounce on all four days before the hosts prevailed.

As Kerala celebrated their maiden entry into the Ranji semis, Gujarat skipper Parthiv Patel suggested that Wayanad pitch was dangerous. “To start up and down from the first session, it’s a bit dangerous. I wouldn’t say it was the proper wicket. The scores are suggesting so. I don’t mind playing on a seaming wicket or a turning wicket. Up and down wicket from ball one is something we don’t want,” said Parthiv.

After getting the thumbs up from captains and coaches last season for producing good surfaces, the concept of neutral curators has come under the scanner this time. During the league stage (only Elite A, B and C group), a whopping 68 matches ended in outright results, but what’s worrying is the large number of matches that completed in six to seven sessions.

After missing out on a knockout berth, Bengal mentor and former India cricketer Arun Lal alleged that some teams prepared dustbowls despite neutral curators being appointed. “Some teams are making wickets that look like pits and we can’t do that. That is unfair to teams not getting that chance. So, some teams are getting to 30, 32 points and we can’t. I think within this framework, an outright win should fetch five points, not six and there should be no system of a bonus point. Or make it five-day cricket because then the true worth of a team comes out,” Arun said.

The final round match between Maharashtra and Railways at Delhi’s Karnail Singh Stadium saw as many as 15 wickets fall inside the first two sessions and the match was over shortly after lunch on day two. Home side Railways won by an innings and 58 runs. Railways’ left-arm spinner Avinash Yadav who opened the bowling returned with a match haul of nine wickets, while another left-arm spinner Satyajeet Bachhav accounted for eight Railways wickets in the first innings.

Another ninth round match featuring Baroda and Karnataka at Vadodara’s Moti Bagh ended in two days with the opening day producing 22 wickets. And again, the spinners had a field day. The match between Rajasthan and Tripura at Agartala couldn’t even last two days with the former winning by an innings.

According to sources, midway through the league stage, BCCI came up with a suggestion to help prepare pitches favouring spinners. “The curators were given certain instructions according to which an area of about 8 to 10 feet from the batting crease was prepared differently to render assistance to spinners. Experienced curators understood what needed to be done, while the lesser experienced groundsmen came up with underprepared surfaces. Thus the pitches were poor and started turning from day one. This brings into question the selection of right candidates as additional curators,” the source said.

“There is a feeling among curators that experienced ground supervisors were overlooked and inexperienced persons were selected for the job, which could be the prime reason for the problem. The new curators seemed under pressure from local associations to produce result-oriented pitches,” the source added.

On the other hand, in West Zone, which is known for result-oriented surfaces, the pitches turned batting friendly. Matches at Valsad that used to roll out bouncy pitches regularly produced massive scores, with the matches ending in tame draws.

A senior groundsman of an international venue said the curators were not following any definite pattern of preparation as mandated by BCCI but were adopting methods “which were whimsical and did not relate to the state of the pitch”. “Surprisingly, it appears that the match referees did not report the poor quality of the pitches to BCCI,” he added.