The hosts, who won the Ashes series 4-0, lost wickets at crucial junctures in reply and fell short in their chase. 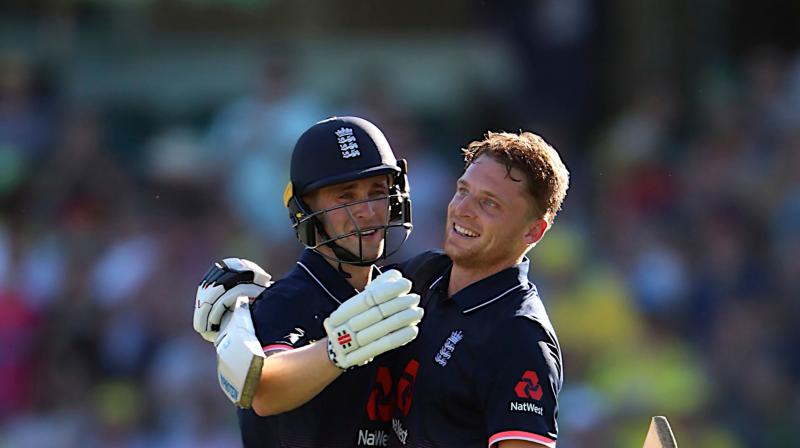 Sydney: England’s Jos Buttler struck a belligerent unbeaten 100 to set up a 16-run win over Australia in the third one-day international on Sunday, as the touring side took an unassailable 3-0 lead in the five-match series.

The right-handed batsman produced late fireworks to complete his fifth ODI hundred on the last ball of England’s innings, helping them reach an unlikely 302-6 in their 50 overs after Australia won the toss and put them in.

The hosts, who won the Ashes series 4-0, lost wickets at crucial junctures in reply and fell short in their chase, reaching 286 for six in their 50 overs.

”So proud of the guys today,“ England captain Eoin Morgan said at the presentation. ”I thought Jos was probably the difference in the sides, certainly with the bat.

“He paced his innings to perfection. He took the responsibility on his shoulders and ... played anchor in one way, until the last five or six overs.”

Australian all-rounder Marcus Stoinis scored 56 in 43 balls and added 74 in a sixth-wicket stand with wicketkeeper Tim Paine, who made 31 in 35 balls, to give the hosts hope of victory, but the target proved beyond their reach.

Aaron Finch continued his strong run with the bat with a 62 in 53 balls after back-to-back centuries in the first two ODIs but the opener’s dismissal in the 21st over to leg-spinner Adil Rashid severely hampered the hosts’ progress.

Finch reviewed the umpire’s lbw decision but replays showed the ball was clipping the leg stump and the on-field decision was upheld.

Australia captain Steve Smith and Mitchell Marsh were going along nicely in a fourth-wicket stand of 68 before the former was given out caught behind off fast bowler Mark Wood with wicketkeeper Buttler clinging on to a low, one-handed grab.

The umpires went to the television room to check the catch but there was no conclusive evidence to rule it out, much to the disappointment of Smith and the Sydney crowd.

Wood was England’s best bowler with 2-46 in his 10 overs while Rashid also dismissed Marsh for 55 for his second wicket for the touring side, who lost Liam Plunkett to a left hamstring injury when the paceman was in his second over.

Earlier, Buttler and Chris Woakes propped up England’s innings after they had been reduced to 189 for six. The duo added 113 in their unbroken partnership, with 102 of those runs coming in the last 10 overs.

Buttler smashed six fours and four sixes in his knock and was ably supported by Woakes, who scored 53 in 36 balls.

Australia’s first-choice quicks Pat Cummins and Josh Hazlewood returned to side in four changes and the bowling kept England in check for a considerable period before Buttler and Woakes began their assault.

“I thought the way we bowled the first 45 overs was pretty good and obviously Jos played exceptionally well and Woakes played well at the end,” Smith said.

“I don’t think we bowled as well as we could have. We bowled in areas they could hit and you don’t do that to a quality player like Jos. I thought we were probably chasing 30 too many.”

The Adelaide Oval will host the fourth ODI on Friday.