Pankaj Singh dismissed both in-form Gujarat openers Samit Gohel (0) and Priyank Panchal (30) before ending the day with figures of 3/77. 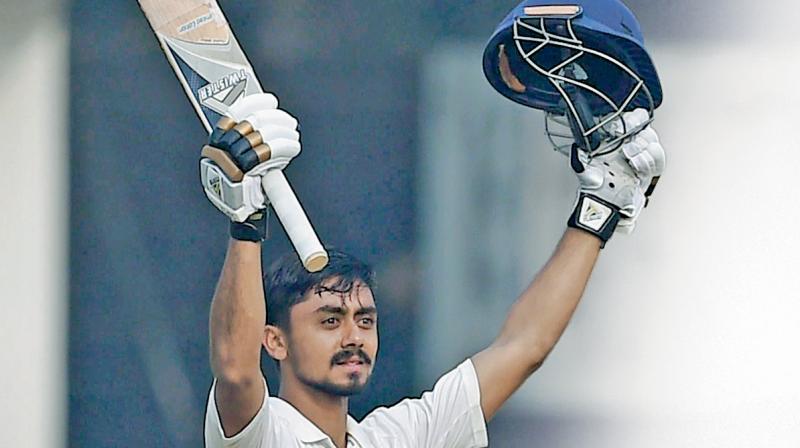 Mumbai: Chirag Gandhi counter attacked with an unbeaten 136 in 159 balls to guide Ranji Trophy champions Gujarat to 300/8 at the end of the first day’s play in the Irani Cup against Rest of India at Brabourne Stadium here on Friday.

Siddharth Kaul (4/73) dismissed Gujarat skipper Parthiv Patel (11) before lunch and went on to take three more wickets despite injuring his finger while fielding. Pankaj Singh dismissed both in-form Gujarat openers Samit Gohel (0) and Priyank Panchal (30) before ending the day with figures of 3/77.

Gandhi came to bat in the post lunch session after Singh and Kaul had reduced Gujarat to 82/4. The 26-year-old forged a 109-run stand with Manprit Juneja (47) to take his team out of trouble and then carried on with the tail to take them to a respectable score.

He completed his maiden first class hundred in 125 balls with 11 boundaries and a six and later struck seven more fours to do a bulk of the scoring in an unbroken ninth wicket stand of 39 with Hardik Patel (9 not out).

“My mind was blank and I wasn’t thinking anything and had no pressure. I am used to such situations while coming down the order and am used to batting with the tail. Today after getting my eye in I went after the ball when it was in my zone without worrying about anything,” said Gandhi who has been in and out of the side in the last few seasons.

“Earlier we had Venugopal Rao in the middle order so I was getting less chances. From last year, I know my role is of a finisher while coming at no. 6 or 7 especially in the shorter format. I had a chat with Mahi (M.S. Dhoni) recently during the Ranji semi-final against Jharkhand (in Nagpur). He told me to be calculated and target certain bowlers while finishing games in the shorter format,” said Gandhi, who scored the winning runs against Mumbai in the Ranji final at Indore.

“That’s a lifetime moment. Every time the footage of our maiden (Ranji triumph will be shown that shot will be there,” Gandhi said.

Earlier, Singh gave RoI a great start by trapping Gohil in front in the first over.