'Not only Chinaman, Hat-trick man too', says Kuldeep Yadav's coach

Team India's spin sensation Kuldeep Yadav, who is also known as a 'chinaman' bowler should now be recognised as a 'hat-trick' man. 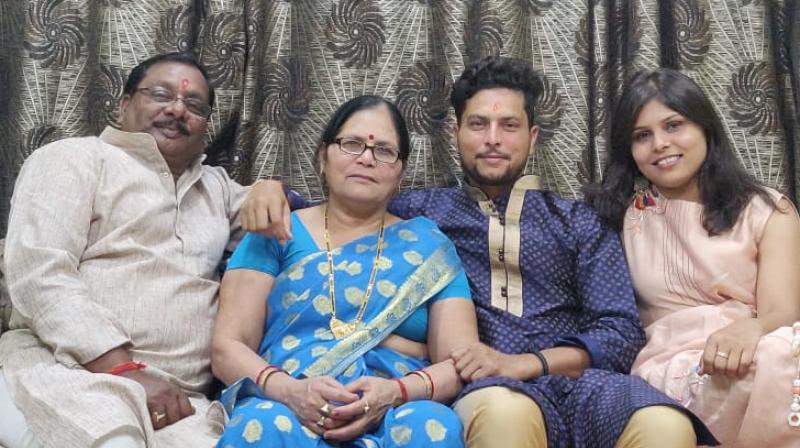 Earlier this year, Kuldeep Yadav was in tears after Moeen Ali's brutal onslaught in one of his overs which yielded 27 runs during IPL match. (Photo: File)

Mumbai: Earlier this year, Kuldeep Yadav was in tears after Moeen Ali's brutal onslaught in one of his overs which yielded 27 runs during IPL match.

On Wednesday, his family and coach had tears of joy.

Team India's spin sensation Kuldeep Yadav, who is also known as a 'chinaman' bowler should now be recognised as a 'hat-trick' man.

"Yes, it is right. Kuldeep is now more obsessed with the hat-tricks. This is not only his second hat-trick in ODI for India but as a junior cricketer also he had grabbed three wickets in three successive deliveries (2014 ICC Under-19 World Cup against Scotland in Dubai)," said his coach, Kapil Pande, speaking exclusively over telephone from Kanpur.

"My advice to him is not only to concentrate on taking wickets and hat-tricks but continue to maintain bowling in line and length. The wickets will come automatically," he added.

The coach did not want to make comparisons with both ODI wickets.

"Both his hat-tricks- the one against Australia (Kolkata, 2017) and the other against the West Indies (Visakhapatnam) are equally important. In his first ODI hat-trick, there were all three different modes of dismissals. MS Wade was bowled; AC Agar lbw; and PJ Cummins caught. Both came after six overs of opponent batting. One more thing, Visakhapatnam was a batting track".

"He was trying for his 100th wicket on Wednesday itself. It will be a first milestone (when he gets it) and it will be sooner than later", the coach opined.

Back home in Kanpur, Kuldeep's both parents (Ram Singh Yadav and Usha Devi) watched the match on TV. "My eldest married daughter Madhu too was at our home and we could not resist the temptation of celebrating son's India record", the father added.

"We never miss watching him play (on TV)".

Incidentally, Kuldeep family will move to a large house soon.

"We are constructing a much bigger house in Defence Colony and hoping to shift there during Holi festivals," the father, who is a brick kiln owner, said.

Now it is the turn of Kuldeep, who turned 26 last week. "There is no hurry. Let him concentrate more on the game. We have no immediate marriage plan for him."

Kuldeep's younger sister, Anushka is a law student and living in a hostel in Delhi.