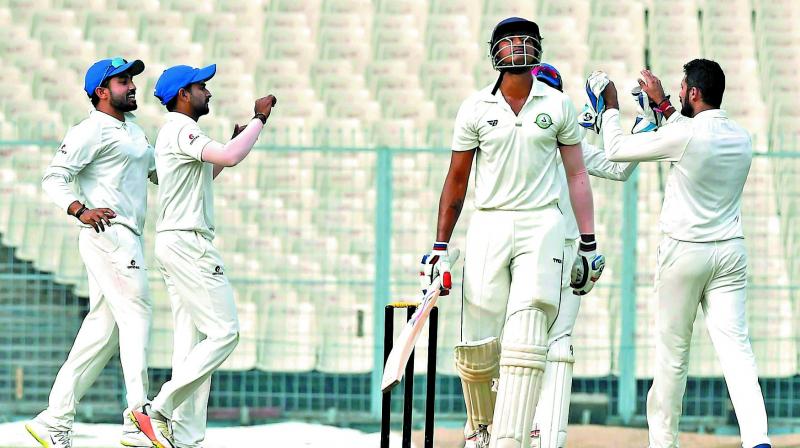 Pune: Young speedster Navdeep Saini bowled one of the most devastating spells of recent times in Indian domestic cricket as Delhi humiliated Bengal by an innings and 26 runs to enter the Ranji Trophy final.

This was after Mohammed Shami bowled his heart out to take 6 for 122 in 39 overs to bowl out Delhi for 398. Having kept the lead down to 112 runs, Bengal were expected to put up a fight, but ran into Saini — a serious India prospect — who unnerved the batsmen with raw pace.

He followed the ‘bible’ for fast bowlers — ‘top of off stump’ — something the Australian legend Glenn McGrath had mastery over.

Saini, who is certain to don India whites in 2018, followed it religiously as Bengal batsmen didn’t have a clue as to what he was bowling.

Sudeep Chatterjee (21) couldn’t bring his bat down as the delivery moved a shade to hit off bail.

Ganesh Satish’s unbeaten half-century and a brisk 49 from Apoorv Wankhade helped Vidarbha wipe out the first-innings deficit and go ahead by 79 runs in their semi-final against Karnataka in Pune.

The third day’s play ended with Vidarbha reaching 195/4. At stumps, Satish was going strong on 71 while Akshay Wadkar was batting on 19.