The Indian team is scheduled to play three Twenty 20 Internationals against the West Indies with the series-opener in Mumbai on December 6. 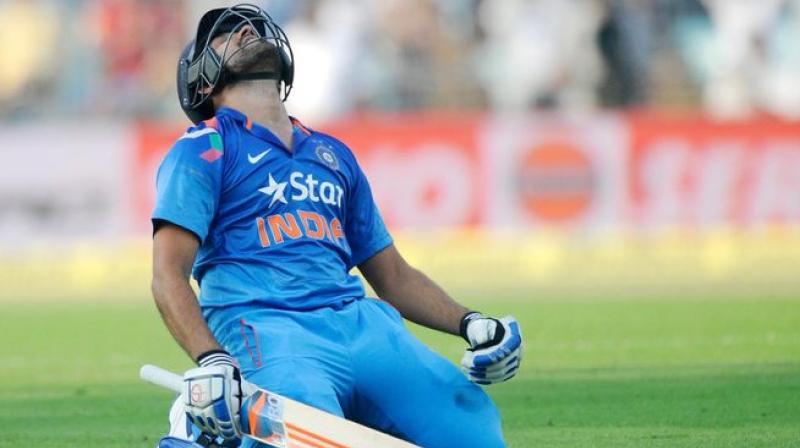 If all goes well, Rohit Sharma may get some well-deserved rest during the three-match ODI series against the Caribbean team so that he is fresh and rejuvenated for the tough tour of New Zealand next year. (Photo: ICC/Twitter)

Kolkata: Vice-captain Rohit Sharma's workload management and opener Shikhar Dhawan's poor form are expected to dominate the deliberations when the national selection committee meets here on Thursday to decide on India's limited-overs squads for the home series against the West Indies.

This is likely to be the last meeting chaired by MSK Prasad as he and central zone selector Gagan Khoda are on their way out having completed four years.

If all goes well, Rohit may get some well-deserved rest during the three-match ODI series against the Caribbean team so that he is fresh and rejuvenated for the tough tour of New Zealand next year where India will play five T20 Internationals, three ODIs and two Test matches.

The Indian team is scheduled to play three Twenty 20 Internationals against the West Indies with the series-opener in Mumbai on December 6 followed by matches in Thiruvananthapuram (December 8) and Hyderabad (December 11).

The three ODIs will be played in Chennai (December 15), Visakhapatnam (December 18) and Cuttack (December 22).

Rohit's workload will be the prominent point of discussion as he has played close to 60 competitive matches (including IPL) this year.

In the current calendar year, the limited-overs vice-captain has played 25 ODIs, 11 Twenty20 Internationals, which is three ODIs and four T20Is more than skipper Virat Kohli, who has been rested twice.

While the onus will also be on Rohit to give his viewpoint, the possibility of him being given a break-in at least one of the two formats looks strong.

The other person, who might feel the heat is the senior opener, Shikhar Dhawan. Dhawan hasn't been in the best of forms since he returned to cricket after sustaining an injury during the World Cup earlier this year.

Mayank Agarwal's stupendous form in Test cricket and a very good List A career average of 50-plus and an above 100 strike-rate makes him a good choice to partner KL Rahul in case the selectors think of looking at the third opener's option.

The soon-to-be 34 Dhawan is also not expected to be around for a long time.

To make matters worse, he went back to domestic cricket to get his mojo back but the results have been less than encouraging. His scores in the ongoing National T20 Championship are 0 (9) against J&K, 9 (6), against Jharkhand, 19 (18) vs Sikkim and 35 (33) against Odisha.

On the other hand, Agarwal's thrilling double hundred against Bangladesh in the first Test at Indore had 28 boundaries and eight huge sixes.

However, Dhawan may just get another go before selectors look at other options.

Ditto for Rishabh Pant, who will don the big gloves with Sanju Samson close on his heels.

Mahendra Singh Dhoni has already started training and if Pant can't seal it during the upcoming series, he might face stiff competition from the 38-year-old legend once IPL comes calling.

With Hardik Pandya (stress fracture), Jasprit Bumrah (back surgery), Navdeep Saini and Bhuvneshwar Kumar (side strain) still recovering from their respective injuries, Shivam Dube and Shardul Thakur are expected to continue in the squad.

Spin bowling all-rounders -- off-spinner Washington Sundar and left-arm spinner Krunal Pandya -- are also under the scanner due to their underwhelming performances.

With Yuzvendra Chahal doing well and if Ravindra Jadeja is not given another break, one among the two could get the axe.

India's new T20 sensation Deepak Chahar is expected to lead the pace attack but Khaleel Ahmed's economy rate has been a problem.

The left-arm pacer leaked 81 runs in the eight overs in the last two T20Is with his figures of 1/37 and 1/44. He had conceded seven successive boundaries during the Rajkot T20.

Khaleel, who made his India debut last year against the West Indies, has failed to impress with a career economy rate of 9.00 in 13 T20Is while going for a better 5.81 in 11 ODIs.