The Eden pitch also is greener than usual, which would benefit the seamers more than they would to the batsmen. 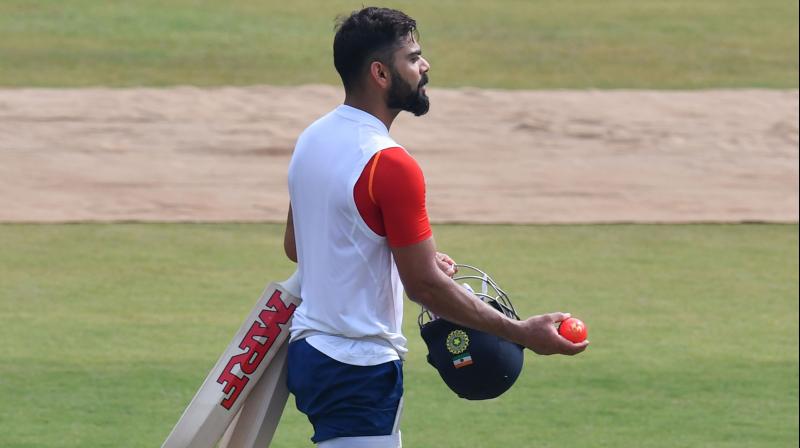 Virat Kohli and Co. will be looking to strike Bangladesh in this historic Test and wrap up the two-match Test series with a win. (Photo: AFP)

Mumbai: India are all set to witness their first Day-Night Test match that will take place in Eden Gardens, Kolkata starting from November 22. Virat and Co. will be looking to strike Bangladesh in this historic Test and wrap up the two-match Test series with a win.

The pitch also is greener than usual, which would benefit the seamers more than they would to the batsmen. Eden Gardens’ chief curator Sujan Mukherjee explains why they had to do this.

Speaking to Hindustan Times, Mukherjee said, “Yes, there is extra grass. It is mainly done to keep the colour of the pink ball intact for a longer period of time. I have consulted the umpires, players who were involved in the CAB league Day/Night Test a few years ago and all of them had advised to leave some extra grass.”

With the pink Sanspareils Greenlands (SG) ball set to make its debut on Friday, Mukherjee seems unclear on how the said ball will behave on this particular pitch.

He said, “I haven’t seen the SG pink ball in a match so don’t know exactly how it’ll behave but I’ve heard from experts that it will swing more. Our outfield is one of the best in the world so I’m sure the pink ball will last long.”

At Eden Gardens, in 41 Tests there have been only five instances that the captains who have won the toss also have opted to field. Out of those five, India have done it three times and have failed to win any one of them.  The curator has advice for the Indian team and specifically the skipper, Virat Kohli regarding that particular stat.

He said, “I would want India to field first. That would allow the batsmen to get a fair idea about the pitch and the new pink ball. The kind of bowling line-up India have, they will also relish the opportunity to bowl on a fresh wicket.”