The Men in Blue have already acquired a 1-0 lead in the three-match series after registering a convincing win against SA in the second T20I. 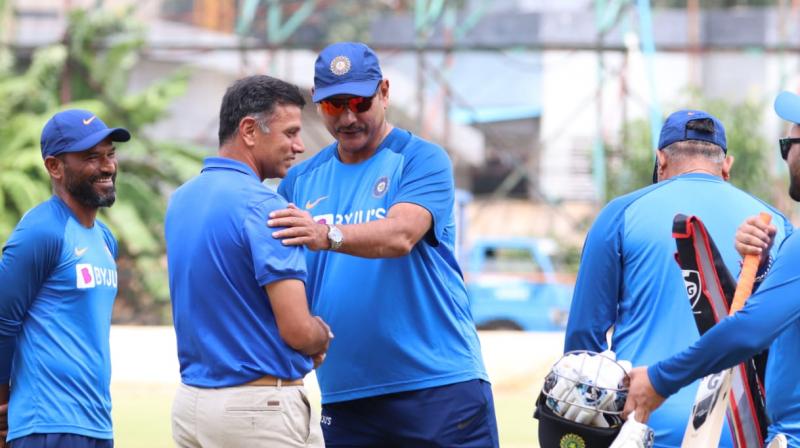 India and South Africa are scheduled to meet in the final T20I encounter at Bengaluru on Sunday. (Photo: BCCI/Twitter)

Former Indian cricketer Rahul Dravid was spotted in the Indian cricket team's training season ahead of the third T20I against South Africa at the Chinnaswamy Stadium in Bengaluru on Sunday.

The Men in Blue have already acquired a 1-0 lead in the three-match series after registering a convincing win against the Proteas in the second T20I. The first T20I was washed out without a ball being bowled at Dharamsala.

BCCI took to Twitter to share the photograph with the caption “When two greats of Indian Cricket meet.” to acknowledge Dravid, who was seen having a chat with Team India's head coach Ravi Shastri.

Dravid played a vital role as the head coach of India A and India U19 teams before he was appointed as the head of cricket in National Cricket Academy (NCA) by BCCI in July.

Indian skipper Virat Kohli smashed an unbeaten 72 to lead India to their first T20I win against South Africa at Mohali on Wednesday.

Kohli also pipped Rohit Sharma as the leading run-scorer in T20 internationals. Kohli now has 2,441 runs from 66 innings to Rohit’s 2,434 from 89 innings. In third is New Zealand’s Martin Guptill who has 2,283 runs from 75 innings.

India and South Africa are scheduled to meet in the final T20I encounter at Bengaluru on Sunday.