Ashwin has scalped 60 wickets in 11 matches against Windies and was also awarded the Man of the Series in 2016. 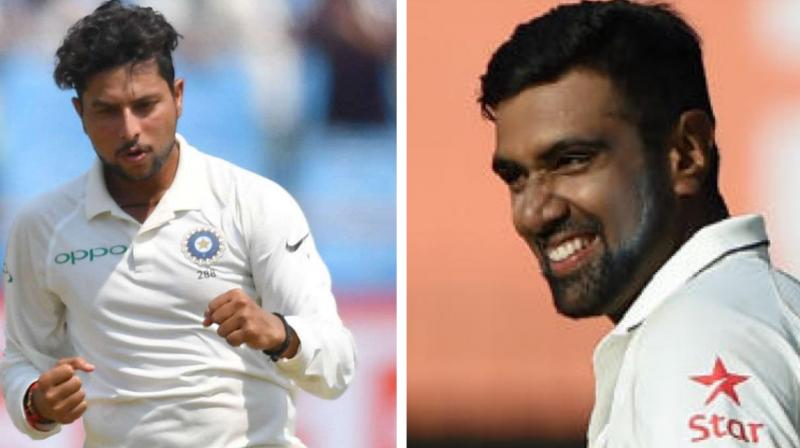 The emergence of Kuldeep Yadav has increased the selection dilemma as it has provided more options to skipper Kohli. (Photo: AFP)

Mumbai: India will initiate their World Test Championship campaign with a two-match series against West Indies. Ahead of the first Test on Thursday, skipper Kohli is spoilt for choice as he has the likes of Ravichandran Ashwin, Ravindra Jadeja and Kuldeep Yadav to choose in the starting squad.

A few years ago, the inclusion of a spinner would not have been a matter of discussion as Ravichandran Ashwin was in his prime. But the emergence of Kuldeep Yadav has increased the selection dilemma as it has provided more options to skipper Kohli.

While Kohli and head coach Ravi Shastri are yet to make a decision about the starting line-up, veteran off-spinner Harbhajan Singh has already made up his mind. Singh's preferred bowler against West Indies will be Kuldeep Yadav.

“On current form, my No. 1 spinner will surely be Kuldeep for the way he takes the ball away from the left-handers and his wicket-taking abilities. Ravindra Jadeja, too, has made most of the chances that he has got in Tests. Probably the only thing working in Ashwin’s favour is his superb record against West Indies,” Harbhajan told The Times of India.

Considering the past experience and record, Ashwin certainly has an upper hand over Yadav. Ashwin has scalped 60 wickets in 11 matches against Windies and was also awarded the Man of the Series in 2016. However, the cutthroat competition in cricket has urged Ashwin to prove his worth all over again for cementing his spot in the Test side.