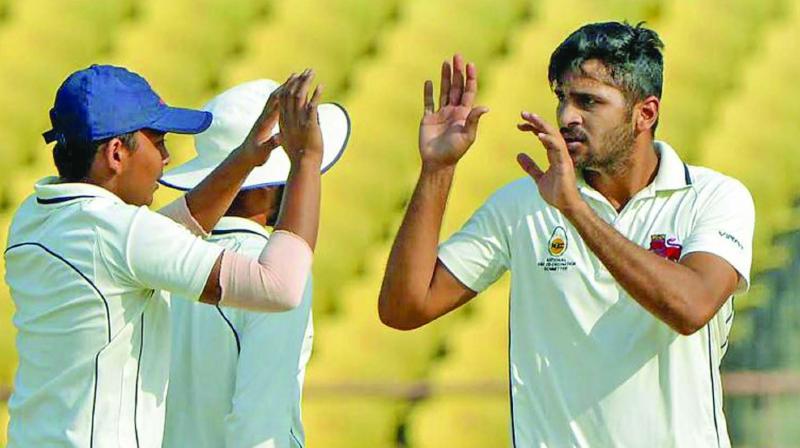 Mumbai medium pacer Shardul Thakur is being congratulated by Prithvi Shaw in a file pic.

Ahead of the announcement of new coach for the forthcoming season, Mumbai Cricket Association have called 65 players for trials at MCA Sharad Pawar Cricket Academy. The players like Aakarshit Gomel, Raunak Sharma, Aditya Dhumal have been told to report at the venue on Thursday morning.

The list doesn’t include the players who have represented Mumbai in the Ranji Trophy atleast in recent times. Many of these fringe players were on show during the T20 Mumbai League. MCA seemingly wants to have look at these players for senior and age group teams across three formats.

The Association is set to announce the new Ranji coach soon and former Mumbai stumper Sulakshan Kulkarni is considered the front-runner for the post but five-member MCA adhoc managing committee will take the final call.  Kulkarni has been Mumbai coach before for three seasons during which Mumbai won their 40th Ranji Trophy title in 2012-13 season under skipper Ajit Agarkar.

Former Mumbai stumper Vinayak Samant who was coach last season and his one year contract had expires, has reapplied for the position. Former India spinner Sairaj Bahutule, too, has applied for the post. The MCA has announced a remuneration of Rs 24 lakh for a year or the successful candidate.

Agarkar was the chief selector for couple of seasons but Milind Rege led selection committee replaced him last month. This means Mumbai may have new coach and new selection committee for the forthcoming season after they failed to progress beyond league stages last season.Experienced Rege has been chief selector twice previously and will be watching the fringe players keenly.

Meanwhile, looking ahead for the season, MCA has sought clothing and equipment sponsorship for Mumbai teams.

“Mumbai Cricket Association is a premier cricket association of the country which has produced many legends of the game and has won the Ranji Trophy for a record 41 times. The Mumbai Cricket Association, apart from the Senior team, has Under-23, Under-19, Under-16, Under-14, Womens Senior, Womens U-23, Womens Under-19 and Girls Under-16 teams which participate in the BCCI conducted tournaments and Zonal Tournaments,” MCA posted on its website.

“The Association is looking for clothing and equipment sponsors for all its teams for the season 2019-20. All interested companies are requested to forward their detailed proposal in sealed envelope to the undersigned on or before June 28,” it added.