Gilly bowled over by DU girls

Impressed by the passion and energy of Jesus and Mary College cricketers, the former wicketkeeper-batsman heaped praises on them. 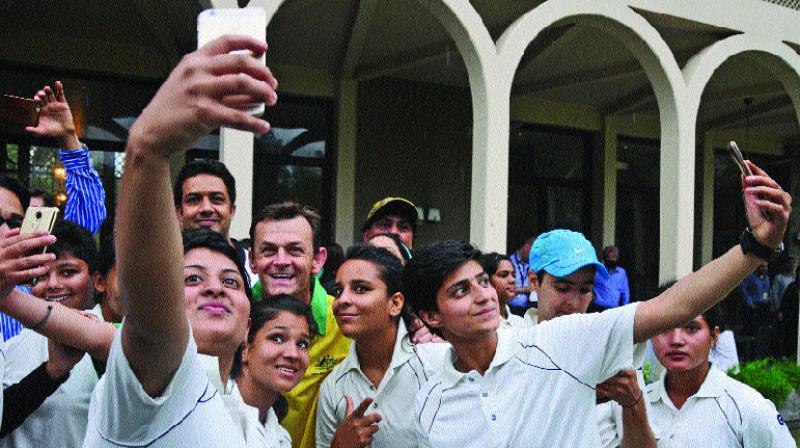 One can only guess how many matches India would have won had Adam Gilchrist opted to become a teacher like his parents. The former Australian cricketer, who was here in his capacity as Australia-India education ambassador, shared, “Cricket happened before I could pursue my career as a teacher but see, cricket has got me back at promoting education.”

Adam Gilchrist played a friendly cricket match against the women’s cricket team from Jesus and Mary College (Delhi University) at the Australian High Commission on Monday morning. His team had women players from the Jammu and Kashmir’s CM XI team and embassy officials. While Gilly’s team scored 61 runs in five overs, the match, which was interrupted by rains many a times, was won by the JMC girls. Arshi Chaudhary, who hit a six on the last ball, told us, “We needed four runs. I could feel the same pressure that these cricketers feel in big matches but mazaa aa gaya. This morning, I told my parents that I was going to play with Gilchrist and they will be delighted to know that I hit him for three sixes.”

Before the game began, he told the girls that there is no better time to pursue sports. “Women today are more recognised for their role in the development of the sport,” and added, “Initially the focus needs to be on developing sports at the grass root level. But just honing the talent is not enough, there are administrative and marketing aspects as well that play a big role.”

After the game, he sounded immensely impressed by the efforts of the girls. He said, “The girls were very competitive. They are so skilled that it becomes clear that they aren’t just social cricketers. Even rains couldn’t stop them. Their passion and energy tell you that they clearly love the game. Failures are part of the sport but always remember the pure joy you get out of playing it.”

Australian High Commissioner to India, Harinder Sidhu on the occasion told us, “We feel privileged to host the two women’s teams. To see more girls play cricket and show their ambitions is just wonderful. It is not lost on me how it was two women who got India its Olympic medals. It was a remarkable feat and now there is more interest in women playing sports and some of the cultural barriers are falling away. In India, it will take a little time for women’s cricket to develop a following as it was the case in Australia.”

The wicketkeeper-batsman before signing off told the mediapersons that he believes Virat Kohli had a great tournament as a captain and he shouldn’t be judged on the results of the Champions Trophy finals. In fact, he added that both India and Australia can learn from a lot their failures and disappointments faced in the recently-concluded tourney.