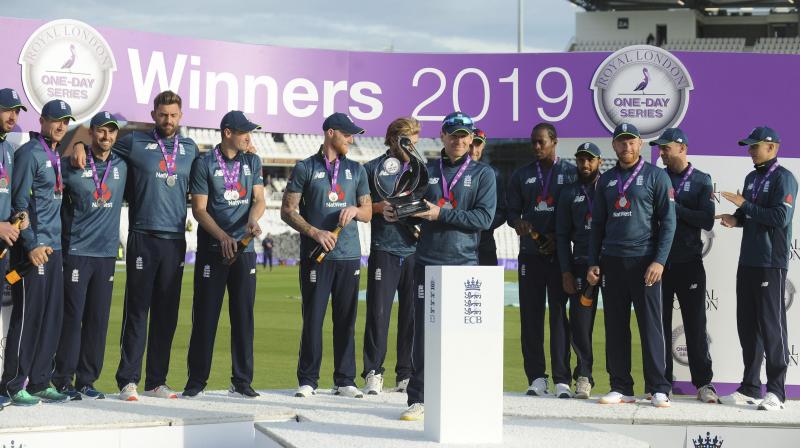 The tourists fought bravely after the setback but were eventually dismissed for 297 in 46.5 overs for their 10th consecutive ODI defeat in matches where a result was achieved. (Photo: AP/PTI)

Root made 84 and Morgan scored 76 as England made 351-9 in 50 overs before Woakes ensured a 4-0 whitewash in the rain-hit series, taking three wickets in the opening three overs to severely dent Pakistan’s chances.

The tourists fought bravely after the setback but were eventually dismissed for 297 in 46.5 overs for their 10th consecutive ODI defeat in matches where a result was achieved.

“The series win is as good as we could have hoped for,” Morgan said in the post-match presentation ceremony.

“Pakistan are a strong side and played some competitive cricket. We’ve chopped and changed but the performance has never been compromised. It emphasises how strong the squad is.”

Pakistan found themselves in trouble at 6-3 after Woakes’ blistering opening spell, but Babar Azam (80) and Sarfaraz Ahmed (97) stitched together a superb 146-run stand for the fourth wicket to give them a fighting chance in the contest.

However, another late collapse after both batsmen were run out meant that Pakistan ended the series empty handed in their final preparation ahead of the World Cup in England and Wales beginning on May 30.

“It’s not ideal for the World Cup, but I’m confident my batsman are ready. The bowling and fielding has not been up to the mark. We have been positive about scoring but have to sort out the fielding,” skipper Ahmed said.

“My message to Pakistan fans is ‘support us’, whenever Pakistan come to England they support the team.”

Man-of-the-match Woakes was the pick of the England bowlers, finishing with figures of 5-54 in his 10 overs.

“Great few weeks but some really important cricket coming up as well,” he said. “Confidence is high, competition for places is there and everyone pushes each other. We never settle, always trying to improve and that’s a great place to be.”

England, who are one of the favourites to lift their first 50-over World Cup title, begin their campaign on the opening day when they take on South Africa at The Oval in London.