Such endings come rarely even against the South Africans who are considered the great tragedians of cricket. 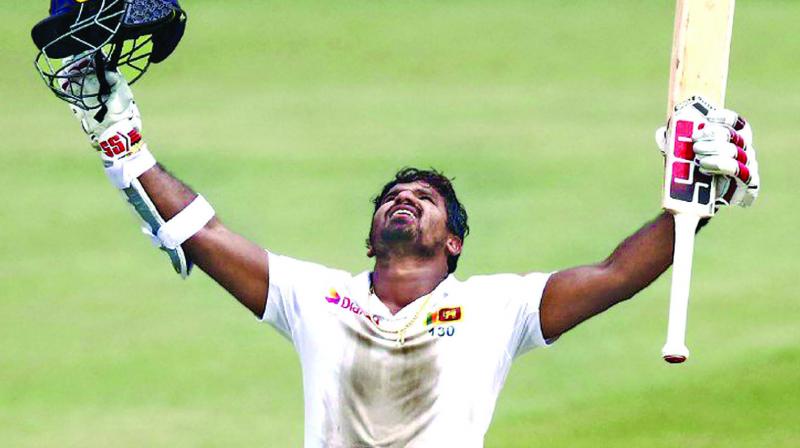 An epic Test match victory was etched in a true David versus Goliath setting at Kingsmead, Durban last week when Kusal Perera fashioned a remarkable climax. Architecting an unbelievable 78-run last wicket stand, he steered Sri Lanka to victory in the company of a true No. 11 in Vishwa Fernando. Such endings come rarely even against the South Africans who are considered the great tragedians of cricket.

Much like the Austrians, the Proteas have consistently shown a genius for defeat in many ODI situations, but this one in Test cricket was a rare one indeed. On a pitch that started out like the feared ‘Black Mamba’ of Durban where the ball seams as if with a will of its own although it settled down to offer batsmen greater comfort, the Sri Lankans kept their nerve and proved that the underdog can always hope to have its day.

An unknown spinner got into the act to keep the target down from impossible heights but even that would have seemed Himalayan when the ninth wicket fell and all it should have taken was one ball from the likes of Dale Steyn to seal it for the harried home team. But it is such wonderfully warm tales proving the old adage that cricket is a game of glorious uncertainties that set alight once again a sense of wonderment about the willow game.

Team India, meanwhile, were thwarted by the fearless Kiwis who fashioned a kid of fairytale of their own to deny India a clean record on the tour down under. They won the deciding T20 by a whisker.

But, normally even the closest of T20i encounters fade from memory quickly and this one too would have if not for the Dinesh Karthik situation in the final over when he farmed the strike with two balls left.

It is a decision that may haunt one of Team India’s designated ‘finishers’ for a long time to come. Did he do the right thing in backing himself when the instinct would have been to give over the strike so the young hitter could attempt to hit two sixes off the last two balls to win? Not unknown in ODI cricket with Shivnarine Chanderpaul, probably the last batsman to be associated with such a flourish at the finish, having done it once. But was Karthik right in taking on that kind of a challenge in a T20i?

Truth to tell, Karthik backed himself. Had he achieved the improbable he would have been a hero, much as he became in the Nidhahas Trophy in Sri Lanka when he brought about a grand finish. The pressures were about the same and you had to admit that the batsman was prepared to step up to the
plate and put his hand up.

It is arguable whether the younger striker could have accomplished the feat. But in a game that is getting increasingly for the young, it may have been wiser to leave it to Krunal Pandya. After all, he had shown spark in clearing the ground in the same innings and it was his blitz in association with Karthik that gave India even that
whiff of a chance of chasing the 200-plus total down.

What the result meant, of course, was that the dream tour was not to be, even though India was not an all-conquering side a rain had deprived it of a win in the deciding T20i in Australia and the series was actually tied 1-1. But these are not results on which too much attention must be bestowed. The bigger issue to look at is whether the visit to New Zealand helped Team India prepare better for the World Cup.

It would be unwise to lay too much store either way with T20 cricket. But what was most impressive about the visit to New Zealand was Team India were willing to believe that they could come through to win from any situation. When Trent Boult’s swing did them in decisively once, they recovered from his strikes with the new ball in the next ODI to come through and win impressively enough. This is not only a battle-hardened side but also one full of
young players with self-belief.

Some chatter has started about skipping the Old Trafford game against Pakistan in the World Cup. While it may not always be possible to separate politics from sport, we must remember that we played Pakistan at the same venue 20 years ago at the height of the Kargil war and Pakistan played in Mohali when ack-ack guns were placed to guard the stadium seven years ago.

This might seem an extraordinary situation when a neighbouring country sponsors a terror hit, but India would have to think deeply. Keeping a World Cup  is an important obligation.