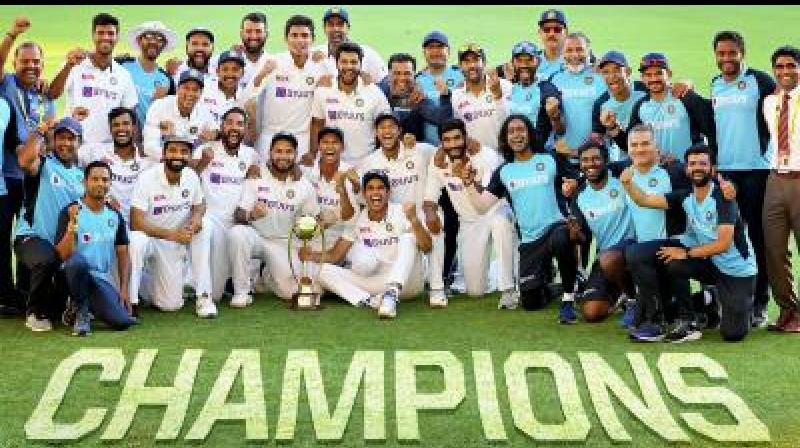 ndian players pose with the winning trophy after defeating Australia by three wickets on the final day of the fourth cricket test match at the Gabba, Brisbane, Australia, on Tuesday. -- PTI

In cricket, the game is not over until the last ball is bowled. A team without the big guns —Virat Kohli, Jasprit Bumrah, Shami, R. Ashwin, Ravindra Jadeja, Hanuman Vihari and K.L. Rahul — pulled off a stunning victory against Australia in the fourth and final Test in Brisbane to retain the Border–Gavaskar Trophy. What’s more, a few among the playing eleven were even debutants.

When players such as T. Natarajan, Mohammed Siraj, Shubman Gill, Shardul Thakur and Washington Sundar propped up in the players’ list, not many thought they’d deliver. However, Sunil Yash kalra, Sports Broadcasters and Commentator, points out how they came to the party when it mattered the most, and came through on top. “They may be inexperienced, but they are full of character and grit. They are the future of Indian cricket you can lookout for, too,” says Sunil.

Sunil also adds that the players always knew they would be tested in Oz. “This is what happens when you have a strong domestic set up where players are touring countries. If these players are groomed and nurtured properly for the future, we can produce more such results,” he says while ascribing Virat Kohli as being largely responsible for the players to play fearless cricket.

Amid the above mentioned players, Ajinkya Rahane, the captain who led the team, is being hailed for his ‘captain cool’ moves, especially drawing praise for his tactical acumen with his effective bowling changes.

Former Team India player Pragyan Ohja maintains that Ajinkya led from the front, adding that his century in the second test match only proved how important it was for a captain to lead from the front when the chips are down.

“His calmness and ability to extract the best from the players has changed everything from the second test. That’s how he has been as a player, calm and composed too,” says Pragyan, adding, “Each player is different in his own right.”

While pointing out that Ajinkya had led the side brilliantly, former cricketer V.V.S. Laxman also agrees that the youngsters delivered when it mattered the most. “It is an emotional moment for me! My eyes were literally moist with this fantastic win. I rate this win as the best one after the 2011 World Cup,” says the former batting great.

Ascribing the current victory to the structure and process of how the team was built, Pragyan further adds that as India A-Team has played around 55 matches and toured various countries, the players were able to showcase their best. “Remember Team India hasn’t fielded full strength, so we have relatively new players; in fact, most of them are debutants. But as most players have been to Australia during their Indian A-Tour, they understood the conditions and played fearless cricket,” the former left-arm spinner says.