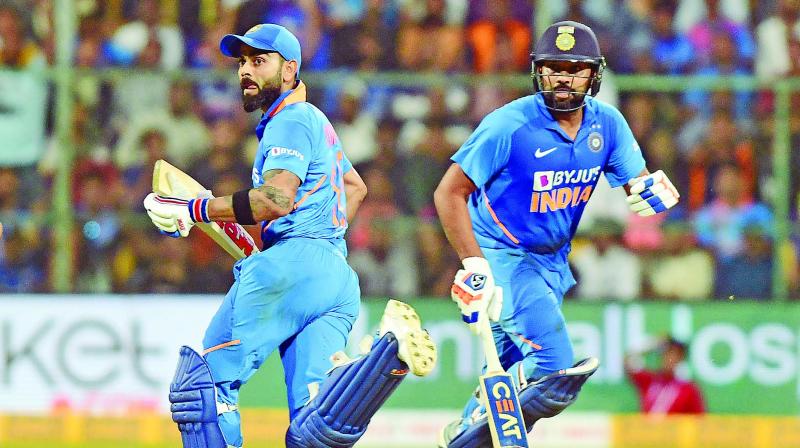 Virat Kohli and Rohit Sharma run between the wickets during match-winning stand against Australia on Sunday. (Photo: Rajkumar Samuel)

Rohit’s knock of 119 (128 balls) was laced with eight boundaries and six sixes. Along with captain Virat Kohli (89), he forged a match-winning stand of 137 runs.

Chasing 287 in the decider, Rohit brought his A-game to the fore as he effortlessly cantered through the chase along with Kohli. He fell soon after completing his century, trying to hoist Adam Zampa.

Kohli took over the mantle from his deputy, keeping the asking rate in check and accelerating towards the end. He fell short of a century by 11 runs as Josh Hazlewood rattled his stumps with a perfect yorker but the game was done and dusted by then.

Shreyas Iyer (44 not out) and Manish Pandey (8 not out) applied the finishing touches for the chase that was always in control for the hosts from the start.

Rohit got off to a flier as he punished loose deliveries from Mitchell Starc and Pat Cummins with disdain. He saw through the first power play without the loss of a wicket. Openers Rohit and K.L Rahul put on 69 runs before Ashton Agar had latter trapped lbw, with the help of the Decision Review System (DRS).

The introduction of spin from both ends slowed the Indian run-rate down as only 32 runs were scored between overs (11-20) with Zampa and Agar bowling tight lines.

Earlier, Steve Smith struck a brilliant hundred as Australia put on 286 for nine.  Smith’s knock of 131 (132 balls) consisted of 16 boundaries and one six as the former Australian captain hit his ninth one day hundred and first in India to lead the visitor’s charge in the crunch game.

Smith came in at number three and anchored the Australian innings first along with Marnus Labuschagne with a 127 run partnership before changing gears as wickets fell at regular intervals. Smith was eventually dismissed by Mohammad Shami as he holed out to Shreyas Iyer in the deep but not before ensuring that the visitors put up a respectable total on board. Shami was the pick of the Indian bowlers picking up 4/63 landing his yorkers on spot.

Shami had Warner caught behind without allowing the southpaw to settle in and a horrible mix-up between Steve Smith and Aaron Finch (19) saw the latter stranded short of his crease after a steady start. The opening power-play yielded 56 runs as familiar nemesis Smith and Labuschagne came together in the middle. Labuschagne was given a reprieve early on in his innings as Kuldeep Yadav failed to gather the ball cleanly and dislodge the stumps. The duo kept the scoreboard ticking with a 100 run partnership and did not get bogged down by the spin of Kuldeep Yadav. Labuschagne who had a breakthrough Australian summer in the longest format showed that he can adapt his game to the limited-overs format as well.

He played perfect fiddle to Smith with a well-composed half-century (54) that frustrated the Indian bowling.

Jadeja broke the crucial 127 run partnership having Labuschagne hit through the off side as Kohli pulled off an excellent diving catch at cover. Australia’s ploy of sending Mitchell Starc at number 5 baffled but did not have an impact on the scoreboard as Starc was dismissed in the same over, attempting a heave over mid-wicket. Kuldeep who had a quiet game picked up his first wicket in his last over as Alex Carey hit against the turn to be caught by Shreyas Iyer in at deep cover.