Paine has responded with polished performances behind the stumps and 130 runs at 43.33. 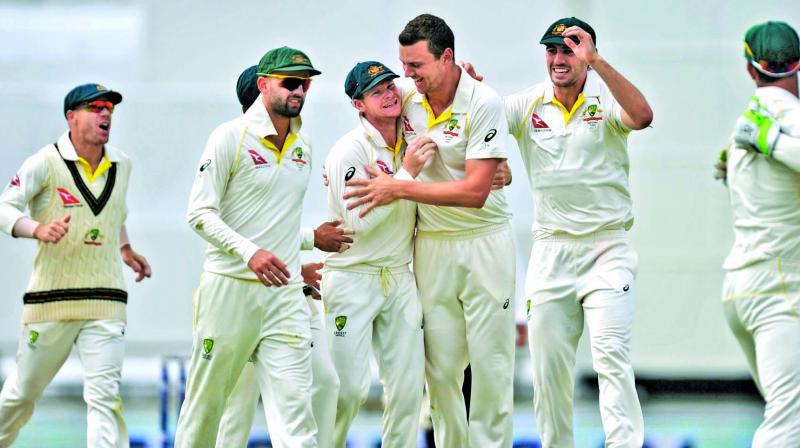 Australian players celebrate a wicket on the final day of the third Ashes Test against England at Perth. (Photo: AP)

Perth: Australia captain Steve Smith has paid tribute to some bold selections after his team regained the Ashes in Perth on Monday.

The home team took an unbeatable 3-0 lead in the series with an innings victory over the English at the WACA Ground, despite rain delays and a damaged pitch.

Smith said the comprehensive result, which has Australia on track for its third Ashes whitewash in four home series, was vindication for the national selectors for making some imaginative selections.

Wicketkeeper Tim Paine was not even keeping for his state side Tasmania when he was named for the first Test at the Gabba, while the recall of 34-year-old Shaun Marsh raised plenty of eyebrows.

Then batsman Peter Handscomb was dropped for the third Test, with underachieving all-rounder Mitchell Marsh getting a surprise recall.

Paine has responded with polished performances behind the stumps and 130 runs at 43.33, while Shaun Marsh produced a crucial century in the second Test in Adelaide and has 224 runs at 74.66. Mitchell Marsh took his chance in the third Test, notching his maiden Test century in making 181.