With Bengal scoring a below par 286 in their first essay, they are certain to concede a first innings lead. 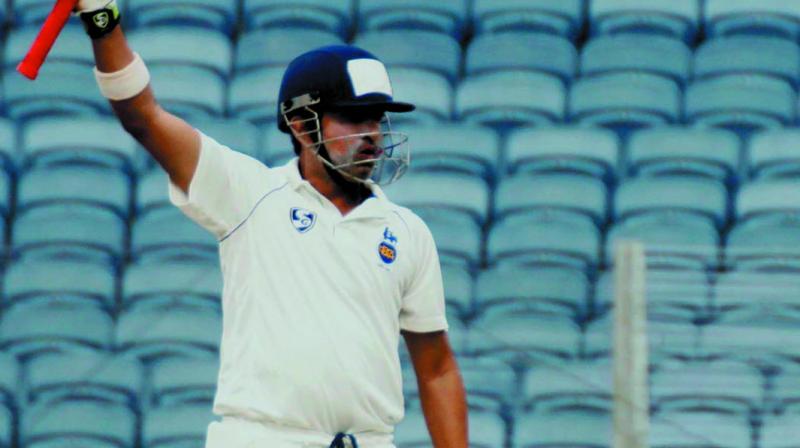 Pune: Gautam Gambhir was patience personified while unheralded Kunal Chandela showed maturity beyond years as their centuries took Delhi to a commanding 271/3 against Bengal on the second day of the Ranji Trophy semi-final, here on Monday.

With Bengal scoring a below par 286 in their first essay, they are certain to concede a first innings lead.

The one positive aspect for Bengal was final session where Delhi scored only 51 runs losing three wickets including Gambhir (127, 216b) to Mohammed Shami.

Gambhir was an epitome of calm during his 42nd first-class hundred in company of Chandela (113 off 192 balls), who is playing only his third first-class match.

The great strength of Gambhir this season has been his attitude, remaining focused on the task of guiding Delhi with crucial runs.

A pull in front of the square followed by a square cut played on the rise off Shami set the tone.

When Dinda intentionally threw a ball towards Gambhir on his follow through — in bad taste — he simply swayed away from the line and didn’t react.

Gambhir hit back to back boundaries off Amir Gani to reach his hundred both into the covers. One raced along the ground and the other was lofted to reach the milestone in 122 balls.

When he raised his bat, the Delhi players sprinted down the stairs from the dressing room to give him a standing ovation.

Once through with hundred, he took fresh guard.

Chandela, on the other hand, waited for pitched up deliveries, playing flowing cover drives while the ones rising from a length were defended. A six off Gani was majestic and as were most of his 18 fours during a 232-run opening stand with Gambhir.

Chandela hit four boundaries in an Amit over as the pressure was let loose.

Nair’s unbeaten 148 ensured Karnataka take a vital 109-run first innings lead over Vidarbha. Resuming at the overnight score of 36/3, Nair hit 20 fours and one six in his stellar knock and batted all the three sessions.