KL Rahul out on 199, India dominate in Chennai

Rahul became only the second Indian after Mohammed Azharuddin to be dismissed for 199. 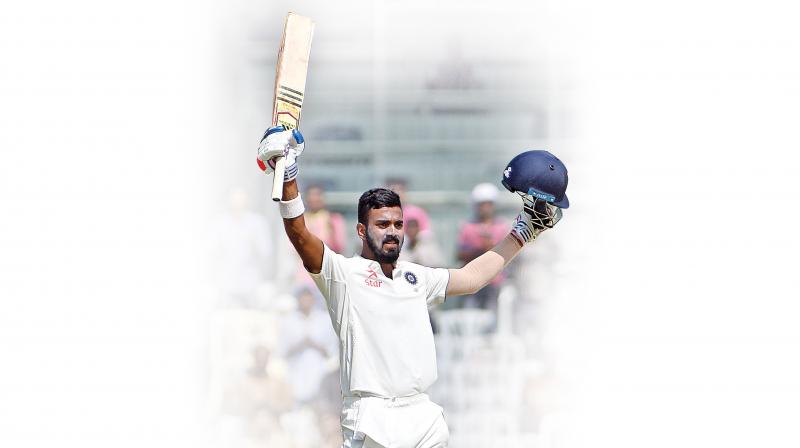 Chennai: He either gets out cheaply or makes it big. In his previous 18 innings, K.L. Rahul had failed to convert only one fifty out of four into hundreds. The Karnataka opener enhanced his reputation on Sunday even though he perished a run short of his maiden double ton, against England here at the M.A. Chidambaram Stadium.

The stroke-filled 199 was Rahul’s maiden century at home — the previous three had come at Sydney, Colombo and Kingston — and it propelled India to 391/4 at stumps on day three after England had sneaked ahead in post-lunch session with the key wickets of Cheteshwar Pujara (16) and Virat Kohli (15). The hosts still trail by 86 runs.

When India were three down for 211, it was Karnataka duo of Rahul and Karun Nair (71 batting), who took it up on themselves to repair the damage caused by the early departure of the reliable Pujara and the run-machine, Kohli. Rahul and Karun made 161 runs for the fourth wicket before the star of the day dug his own grave.

Rahul, who slog swept leg-spinner Adil Rashid for a boundary to reach 199 the previous ball, dragged himself well outside the off stump and lobbed a simple catch to Jose Buttler at point much to deflate the crowd as well as the Indian dressing room who were on their feet to celebrate a milestone. Rahul became only the second Indian after Mohammed Azharuddin to be dismissed for 199.

M. Vijay, who couldn’t open the innings on Saturday with a bruised shoulder, came out to bat at no. 6 and he didn’t show any signs of discomfort in his assured start of 17 off 31 balls. For Karun, the Chennai Test was deemed the last opportunity to impress after back-to-back failures since his debut in Mohali and he has set a solid platform for a big knock.

Earlier, Alastair Cook’s field set-up was a photo copy of Virat Kohli’s placements with a deep backward square leg and deep point for a fast bowler. The ploy was aimed at curtailing boundaries, but Cook soon realised England were not putting enough pressure on the openers who had by then grown in strength from their steady start to complete a century partnership. The 152-run stand between makeshift opener Parthiv Patel (71) and Rahul is the best of the season and first century partnership in 32 innings spanning over 18 months.

Rahul showed exemplary footwork, especially against spinners. He took the aerial route to launch debutant left-arm spinner Liam Dawson for a pair of sixes. He used the sweeps confidently and even reverse swept to unsettle Rashid and offie Moeen Ali.

The pitch that slowed down considerably didn’t help England’s cause either.

Boundaries, however, dried up in the post-lunch session when pacers Ben Stokes and Stuart Broad were operating. Stokes removed Pujara by having him caught at slip while Broad moved around the stumps to take the wicket of Kohli who drove straight into the hands of the extra cover fielder.